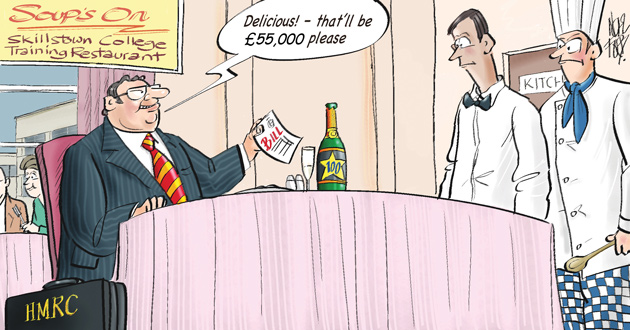 A Hampshire college that went to court in its bid to win a training restaurant tax rebate could be facing a new legal battle from Her Majesty’s Revenue and Customs (HMRC), FE Week can reveal.

The taxman has been granted leave to appeal a decision made in February which found the supplies used by Brockenhurst College for its on-site training restaurant, MJ’s, were integral to educating students and so should have been exempt from VAT.

The college was awarded a £55,000 refund of four years’ worth of tax paid to HMRC on supplies to the 50-seater training restaurant, which is staffed by students and open to the public.

The win had prompted the hopes of a potential multi-million pound tax windfall for the wider college sector, and even the Association of Employment and Learning Providers (AELP) has been looking at whether its members might be due a similar payout.

However, a spokesperson for the HMRC told FE Week: “We have been granted leave to appeal to the Court of Appeal.

The original ruling was welcomed by the sector, as more than 160 colleges in England operate similar facilities, plus other training enterprises such as hair salons, spas and theatres, meaning if other colleges were to pursue claims, it could net the college sector tens of millions of pounds.

Assistant chief executive of the Association of Colleges Julian Gravatt described news of the possible appeal as “disappointing”.

He said: “VAT law is exceptionally complex and this case revolved around the way in which VAT exemptions apply in cases where students are providing services as part of their education, for example in a training restaurant on campus.

“Any VAT savings that colleges make are reinvested for the benefit of students so it is disappointing that HMRC are making an appeal against the earlier decision.”

Brockenhurst College principal Di Roberts (pictured front page) had said she planned to plough the windfall back into the college, but he college declined to comment on the latest development.

“Brockenhurst College argued the restaurant supplies were exempt by virtue of being part of the education and vocational training for the hospitality students — quite rightly, in much the same way as we argue that concerts and performances given by students as part of their educational course are also exempt,” he said.

“The absence of a profit element (to the supplies) demonstrated an intention to supply education, rather than commercial catering or entertainment provision.”

“In the current economic climate where funds are tight, receiving a rebate could make all the difference to a college and the courses it offers.”

A spokesperson for the AELP confirmed it had been taking advice on whether independent learning providers could also take advantage of any potential refunds, but added that it was unclear whether the same rule would apply.

He added that it was likely HMRC would “consider any case on its own merits”.