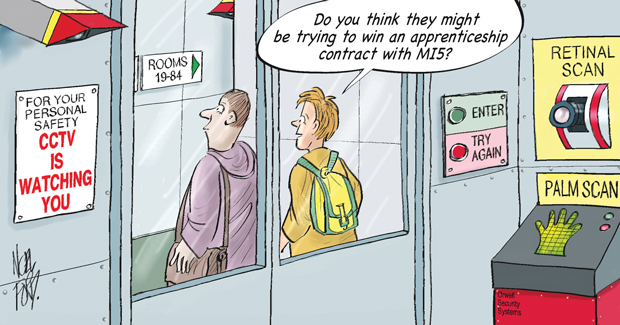 The boss of a Leicester-based national subcontractor where learners have their finger measurements scanned to get into classrooms has defended his firm’s collection of biometric data.

Ronan Smith, founder of Edudo, a Skills Funding Agency subcontractor with a £563,835 contract from Bedford College, said the system was “entirely voluntary” in response to a warning from a privacy group about the collection of such data.

“All learners are able to opt-out of biometric identification if they wish and do so,” said Mr Smith, who added that palm-print recognition and retina scans could also be used.

He added: “The response among students has been really warm, and many students have signed up to biometric enrolment, although of course some did have problems with it and did not opt in, and that’s absolutely fine.”

Mr Smith said Edudo did not collect or store students’ fingerprints but instead took a series of measurements to allow the scanner to guess whether the finger being scanned was similar enough to the measurements on file for it to be likely to be the right person, rather than a definitive identification produced by a fingerprint.

But privacy body Big Brother Watch has called for caution and transparency over the collection and use of the data.

Big Brother Watch director Nick Pickles said: “Individuals should have all the facts about what information is being collected, how it is used and who can access it.”

He also called for legal safeguards to be put in place to ensure that such technology was always used by choice.

Mr Pickles said: “This sort of technology should only ever be voluntary, as it offers a means of tracking and monitoring individuals across multiple systems.

“As with many new systems, they start being used for one relatively innocuous task and then quickly expand to cover a range of increasingly private activities.”

Edudo introduced the technology, produced by the provider’s sister company Edududes, also founded by Mr Smith, late last year and is now used by around 800 of its 5,000 students.

“We have the sense that we’re leading the field in developing this technology for use in work-based learning,” said Mr Smith.

“It reduces paperwork and just makes so much more sense to confirm the attendance register through scanning in.”

Although the use of such technology is only just emerging in the FE sector, biometric data use in schools has led the government to introduce guidance banning schools from using face-recognition software or fingerprints without permission from parents.

The guidance is being consulted on, but if implemented would come into effect from September 2013.

Mr Pickles said: “There is clearly a trend towards a greater use of biometrics, which is why it was absolutely right for the government to legislate that these systems must never be compulsory in education institutions.

“The question now is whether the pace of uptake warrants further legislation to give people greater protection.”

And Mr Smith said Edudo was fully compliant with the Data Protection Act.

“Biometric data is stored internally on Edudo systems and is not shared with any third party organisation, including government departments,” he said.

“Once a learner has completed their education journey with Edudo, the biometric data is destroyed.”

A learner who returned to the provider after a break would have to give their information a second time to re-enrol on the system, he said.