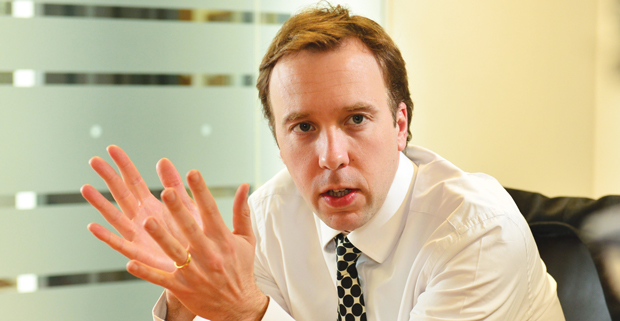 Skills Minister Matthew Hancock (pictured above) has hit back at criticism of government cuts, claiming it was “misleading” to say funding for adult skills faced a 19 per cent fall in the next two years.

In an exclusive interview with FE Week, he defended his record with the sector.

Mr Hancock blamed “difficult financial constraints” for the cuts he has presided over, and said the adult skills budget cut would be mitigated by an increase in the amount of funding for advanced learning loans from £129m to £498m.

He said: “I am standing up for colleges extremely robustly. The idea that funding is being cut by as much as 19 per cent is inaccurate — it is a switch in funding from one type to another, and for good reason.

“For instance, keeping hold of the loans budget, even when we took apprenticeships out of loans, I think was really important for the sector.

“So of course we have to live within difficult financial constraints, and we all know why that is, and it very clearly dates from before 2010, and anybody in this job would be having to live within those constraints.

“The question is, do you do what is necessary to support the colleges to get through that? And I think that we are.”

It follows the release of a report, 16-19 Education Stripped to the Bare Bones, from the Association of School and College Leaders (ASCL), Association of Colleges (AoC), Sixth Form Colleges Association (SFCA), Independent Academies Association (IAA), Freedom and Autonomy for
Schools (FASNA) and Principals’ Professional Council (PPC).

It says that funding for post-16 education was now just over a half (58 per cent) of what it was when today’s 17 year-olds were born, and called on Education Secretary Michael Gove to take action.

“So if you actually look at the policy you will find a progressive policy of support for people from less well-off homes, and those who need extra support because, through no fault of their own, because of a disability or learning difficulty, and people on vocational courses. So if you want to call that ideological, it’s progressive and it’s supportive of those most in need.”