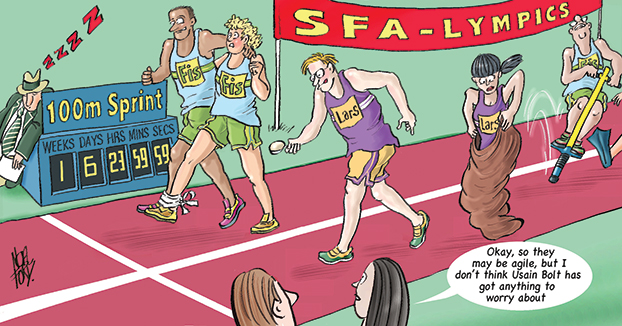 It said it was employing a “number of smaller teams working in two-week bursts of activity, known as sprints”.

The new system is being used to develop Fis and the “learning aims rates service” for 2014/15. It is understood that two “sprints” have already taken place.

The move comes after current software systems were introduced that continue to be plagued with problems.

However, an agency spokesperson said: “Rather than develop a new Fis each year, we will add a new funding year module to the existing system.

“The advantage of this new way of working is that measurable improvements are made to each system on a regular basis.

“The project team is also able to adapt its delivery objectives very quickly to take account of feedback and external requirements.”

It should provide some hope for providers’ management information systems (MIS) staff who have been unable to download current software and, in some cases when they have, keep getting unreliable funding reports.

Stephen Hewitt, Morley College’s strategic funding, enrolments and examinations manager, said: “It’s a little bit silly using words like sprint, particularly when you look at how long it has taken to get the funding software right.

“But I suppose those are the words people use for this sort of thing and we are hardly free of silly jargon in this sector.

“If their new way of doing things did help finally develop Lars and solved the problems with Fis then that would definitely be a good thing.”

The current Fis should have been available in August last year, but was not released until November — and providers say it is still giving unreliable funding data reports.
The learning aims reference system (Lars) should also have been available by last August.

However, providers are still having to use Lars Lite instead — a temporary downloadable database from the agency that providers claim is also producing unreliable data.

Private contractor Trinity Expert Systems was originally hired by the agency to develop Lars through a contract thought to be worth more than £5m.

But it went into administration last year and was bought-out by London-based Liberata IT Solutions.

The agency and Liberata, which took over Trinity Expert Systems in October, declined to comment on whether administration had disrupted the development of Lars.

“I take full responsibility for everything that happens in my portfolio, including within the agency and these IT problems. I am very sorry for the disruption caused by the new system,” he said. “We have continued to pay all providers on time, and will work to resolve the problems as soon as possible.”

However, the agency’s new approach was given short shrift by Shadow Skills Minister Liam Byrne, who criticised the Department for Business, innovation and Skills (BIS).

He said: “Under this government, BIS couldn’t even manage a slow walk towards operational efficiency when it comes to skills funding, let alone a sprint.”

It is understood the launch date for Lars has now been put back to at least May.

“We appreciate that there are still improvements we can make and will continue to work with the sector to identify these,” said an agency spokesperson.