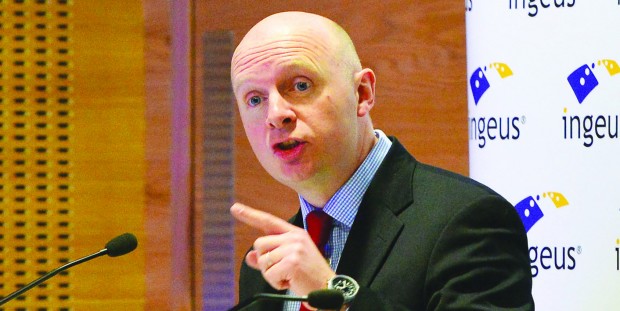 Technology dominated the debate at a conference arranged to discuss the future of the UK skills sector.

The UK Commission for Employment and Skills and Work Foundation’s Skills for the Future conference was held at the headquarters of accountants Deloitte in central London last Monday (March 3).

The event was used to officially launch a report by the commission called The Future of Work: Jobs and Skills in 2030, and many of the conference speakers spoke about how technology is becoming a more dominant force in the skills world.

In his keynote speech, Skills Minister Matthew Hancock said: “We all know that an effective skills system is an economic necessity. That is not new. But what is new is that it is becoming more important than ever.”

He used the example of WhatsApp, a smartphone instant messaging service which employs just 55 people which was recently bought by Facebook for £11.4bn — around the same value of clothing brand Gap, which has 135,000 employees.

Mr Hancock said: “It is a sign of the times that technology and globalisation are changing the shape of the labour market, and it is, to me, an extreme version of the argument that has run that the return on skills is higher and that the labour market needs to promote and policy needs to support a high-skill economy.

“As the number of jobs grows in the economy, we also need to make sure that young people can get those jobs. It is absolutely vital in a world where youth unemployment rose even in the run-up to 2004 to 2008. At the moment something is wrong here and we need to address this.”

He said the government and businesses had to work together to address the skills gap England is facing. He said: “I want to talk about the link between employment and skills, and to argue that employers, where they can’t find the skilled staff they need, part of the problem is because our system has lacked rigour and responsiveness to their needs. I want to explain our response and about how we can tackle this gap and suggest that we have a once-in-a-generation opportunity to do so.

Shadow Skills Minister Liam Byrne also spoke about technology, and criticised the government for failing to be realistic about the state of the jobs market.

He said: “The government would like you to think that it is all fine, that all is well in the jobs market, there is now plenty of work to go around. As someone who started work behind a fry station in McDonald’s, I am someone who believes that any work is better than no work.

“I think all of us here would agree that a good job is better than a bad job, and right now there are quite simply not enough good jobs to go around.

“We now live in a country where the great wage crash is producing almost as much damage as the great financial crash a few years ago. I think it is the defining issue with our economy of our times.”

“We are beginning to see extraordinary innovations from Google’s driverless cars now being tested in San Francisco, to better diagnostics of cancer. There is now enough technology in a Nissan Leaf car to render the car a fly-by-wire robot, which is the kind of technology which in the coming years is going to revolutionise the logistics industry.

“Some economists at the Oxford Martin School just before Christmas put a lot of this together and drew the conclusion that up to 47 per cent of jobs in our economy today will be automated over the next 10 years.

“First it was blue collar jobs, and now it is white collar jobs too. This is going to present policy makers and people like you with some of the most difficult public policy challenges over the next decade.”

In the commission’s report, trends which will shape the future of the UK jobs and skills market are examined. It points to a growing economically-active older population, increased income uncertainty and growing diversity, along with big changes in the way people work.

The report emphasises the likelihood that technology will “replicate the judgement and experience of human workers” and an ensuing “skills activism”, forcing the government to increase budgets to re-skill people to deal with a “rapid growth” in unemployment.

It talks about online platforms becoming the “channel of choice” for education and training providers, and an increase in requirement for company-specific qualifications as a condition of employment.

Mr Hancock added: “In the UK we stagnate and too many of our youngest generation are leaving education without essential skills. But just as important as the quantum skills, too often our young people have the wrong skills.

“If the question is why do we have youth unemployment and at the same time employer demand for skills, I think the answer lies in the structure of the skills system, which has produced young people with low skills and the wrong skills, and we shouldn’t be surprised then if employers cannot get the right people.

“The responsibility with solving that problem lies squarely with us. We have got to fix it.”

A plan to pay colleges to act as guinea pigs for new technical qualifications due to be introduced in the autumn was unveiled by Skills Minister Matthew Hancock at the Skills for the Future conference.

Mr Hancock used his speech to announce that eight institutions would become trailblazers for the new technical baccalaureate, or “Tech Bacc”.

He said: “From 2016, a new set of approved qualifications will be taught, and with only those winning the support of universities or employers included in performance tables.

“These include the new tech level qualifications, the core of the Tech Bacc, which will be taught from this autumn giving high quality alternative to A-levels, and each one has to be endorsed by employers.

“I am delighted today to be able to announce new Tech Bacc trailblazers. We have eight post 16 schools and colleges which have agreed to develop their technical subjects with local employers, we
are funding them to explore how their courses can reflect the real world of work and raise quality
even further.”

The new qualification, which will count towards college and sixth form league tables, has been described by organisations including the Association of Colleges and the Association of School and College Leaders in the past as “a step in the right direction” towards raising the profile of vocational education.

The Tech Bacc will be introduced for courses beginning in September, but will not count towards performance tables until January 2017.

The Department for Education (DfE), which will run the trailblazers scheme, has not yet announced which institutions will be involved in the pilot, when it will take place, or how much it will cost.

A spokesperson said no further details could be given at this stage, but that an announcement would take place soon.