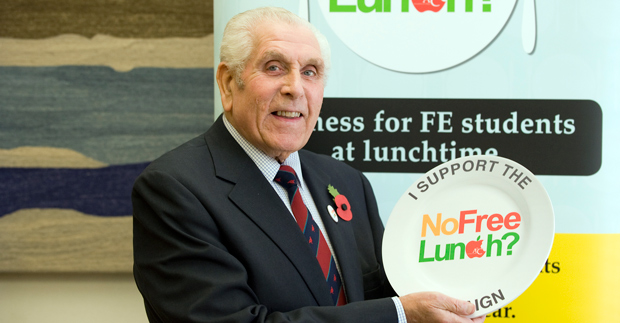 Tributes have flooded in for Labour life peer Lord Bilston (pictured) who launched the all-party parliamentary group for FE and lifelong learning.

Lord Bilston, who was MP for Wolverhampton South East for 18 years from 1987 before joining the House of Lords, has died, aged 71.

He had been suffering from cancer since November and had spent time in hospital before returning home to be with his family in his final weeks.

He said: “Dennis was a steadfast supporter of colleges, and of the AoC, for the best part of 20 years, regularly chairing meetings, asking questions and raising our concerns quietly, but very effectively, with government.

“He set up the all-party parliamentary group, which regularly heard about the work of colleges and challenged ministers to do better for his beloved FE.

“He persuaded the then Chancellor, Gordon Brown, to come along to the group [for hearings in 2005 and 2006], producing a record attendance of MPs.

“Dennis would be as charming as ever in gently encouraging Mr Brown to go a step further in offering something to help colleges with their work.”

The father-of-two launched the parliamentary group in 1997 and served as chair until he stood down in 2005.

He said: “He strongly supported our No Free Lunch? campaign and before Christmas we met him to talk about raising the profile of colleges in the House of Lords. He will be sorely missed.”

The No Free Lunch? campaign secured a commitment last summer from the government to extend free school meals to disadvantaged students in colleges from September this year.

Alastair Thomson, principal advocacy officer at the National Institute of Adult Continuing Education, said: “Lord Bilston was one of the most reliable and supportive parliamentarians when it came to adult learning.

“He was instrumental in establishing the all-party parliamentary group for FE and lifelong learning and was a frequent and enthusiastic contributor to debates on education and skills.

“He firmly believed that people of all ages should have the opportunities they need to be able to transform their lives and communities through learning.”

Lynne Sedgmore, 157 Group executive director, said: “We are sorry to hear of the death of Lord Bilston.

“He was at the forefront of championing FE in parliamentary circles and will be sadly missed.”

Labour leader Ed Miliband tweeted: “Very sad to hear about the passing of Dennis Turner. He dedicated his life to public service and the people of Wolverhampton & Bilston.”