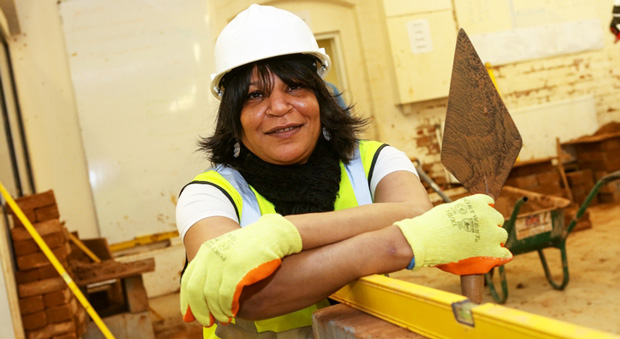 Former beautician Jaqueline Butler had a career rethink after redecorating her house. Two years later, and with level one qualifications in building, plastering, and painting and decorating under her belt, she’s planning to launch her own construction business, writes Paul Offord.

“Construction is a lot like beauty,” says Jaqueline Butler, “you start with a blank canvas and create something.”
The grandmother-of-four is well-qualified to make the comparison having earned a living as a mobile beautician, along with part time barmaid, before turning her hand to the building trade.
After raising six children and being unemployed for three years, Jaqueline was looking for a new challenge and found it in the form of a level one plastering course at Birmingham Metropolitan College.
The 46-year-old had decided to start redecorating her five-bedroom house and enjoyed tiling the bathroom and kitchen and painting the living room so much that she was inspired to retrain.
She passed level one courses in bricklaying and painting and decorating and now has four weeks to go on a plumbing course.
She said: “As soon as my children were old enough to look after themselves, I thought: ‘Right, it’s time for me to do what I want now and the courses have brought me a lot of satisfaction’.
“I was the only woman on my bricklaying course but all the men were very supportive. It was really nothing to worry about and we all got on with learning our new trade together.”
Jaqueline plans to use her new skills to launch a building and decorating business.
She said: “Now that my children have grown up, I’m determined to do something with my life and this is a great start on the road to getting an end result.
“If my business ever took off I would only want to employ women.
“I think there would be a niche for female builders and decorators, as most of the ladies I know have told me they would feel more comfortable if a woman came into their home to do work.
“Maybe this kind of work could do with a woman’s touch anyway. I like whatever I work on to be beautiful, whether that’s building a wall or putting up wallpaper.”
Jaqueline said her children Matthew, aged 28, Marie, 26, Martin, 26, Melissa, 22, Daniel, 21, and David, 20, and grandchildren Kierna, seven, Cassias and Calib, both three, and Tayon, two, were all proud of her achievements.
She said: “My family are all chuffed to bits and proud of the skills I have learned.
“I’m looking at what I can do with my plumbing skills next. I would like to install an en-suite bathroom by my bedroom at some point.
“I like to do things properly with whatever I do, and take a lot of pleasure from seeing a project go from the planning stage to me actually completing it myself.
“My courses have allowed me to do all sorts of extra work around the house — for example I built a lovely brick wall in my back garden and plastered my hall.”
Tony Holder, construction lecturer at Birmingham Metropolitan College, said: “Jaqueline has been like a mother figure to all of the lads who were studying with her.
“She shows great patience and takes her time over her jobs and I’m really pleased that she has successfully passed her qualifications.”

Cap: Jaqueline Butler  building a wall and, inset, showing off her trowel