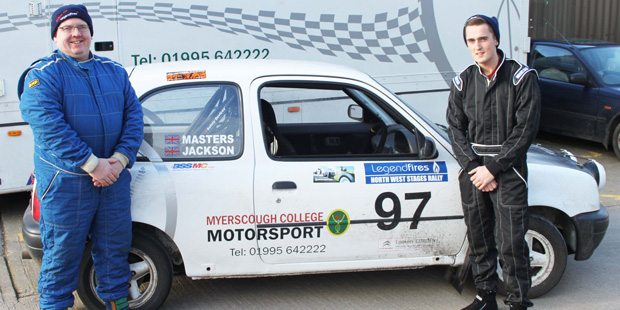 Myerscough College staff and motorsport students hit top gear by rebuilding, servicing and racing in cars for a rally.
The students rebuilt a Nissan Micra and Ford Escort mark two from a basic frame, installing the engines, gears, clutch, and electronics, which took part in the 2014 Legend Fires North West Stages Rally along the Fylde coast, in Lancashire.
Motorsports lecturer Pat Masters drove the Micra, which came home first in its class.
His co-driver and navigator was 19-year-old student Lewis Jackson, who said: “This was the first rally I’d navigated in. I never thought I’d end up actually in a car. Having Pat as the driver was great — he’s really experienced with off-roading and I trusted him, which made it easier for me.’’

The Escort, which was driven and navigated by people from outside the college, finished fifth in its class.
Both cars were serviced throughout the rally by the students, under the supervision of their tutors.
Mr Masters said: ‘’Lewis was an excellent navigator for his first go.
“He was confident, relaxed and never got flustered.
“I couldn’t have got through it without him.
“It was a great effort across the whole department, with staff and students from across higher and further education taking an active role.
“It took many weeks of planning and logistics to get us there.’’

Cap: Pat Masters and Lewis Jackson standing by their Micra. Inset: Staff and students from the Myerscough motorsport team