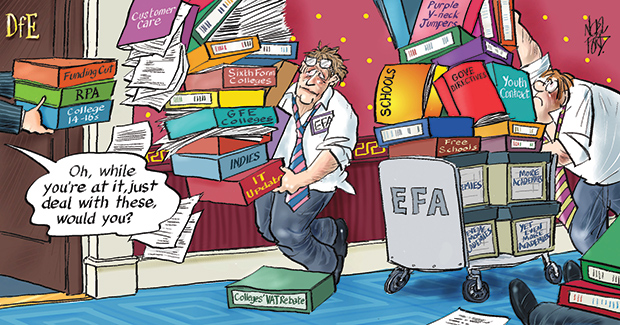 A government investigation into the Education Funding Agency has warned it could become “overloaded” as financial constraints, staffing difficulties and an increased workload take hold.

The National Audit Office has published the findings of its investigation, launched in June last year into whether the agency was “prepared to meet future challenges”.

It said funding and assurance responsibilities along with a host of other new considerations had been transferred to the agency — formed in 2012 — from its predecessors by the Department for Education (DfE).

The report further warned that agency “customers”, including colleges, local authorities and academies, would increase in number by around 50 per cent to almost 12,000 between 2012-13 and 2015-16. But, based on planned staff numbers, the report said, the ratio of customers to each agency staff member could rise from 10:1 to 13:1.

National Audit Office head Amyas Morse said: “Given the agency’s expanding remit and rapidly growing customer base, it must now bring together its existing improvement plans and quickly implement an operating model capable of dealing with the new demands.

“Our experience of similar bodies in other sectors suggests that the agency might otherwise become overloaded, to the detriment of its own performance and risking value for money across the education system.”

The report acknowledged increased closer working between the agency and DfE, and confirmed the agency had “managed operational challenges to meet most of the limited performance indicators it had set”.

But it said it had failed to meet expectations in other areas and called for the agency to produce a “roadmap for change”.

It added that the DfE and the agency needed to, “jointly assess the capacity of the agency before the DfE allocates new responsibilities, to prevent overburdening the agency”.

Public Accounts Committee chair Margaret Hodge told of her concern at the findings of the investigation.

She said: “I fail to see how the agency can reduce costs by 15 per cent while simultaneously expecting to see a 50 per cent increase in demand for its services.

“There is a real danger that the agency will simply become overloaded, putting at risk the value for money it achieves from its £51bn of funding.”

A DfE spokesperson told FE Week: “We are pleased that the audit office has recognised the good work that the agency has done to meet the challenges of the expansion of its role and the growth in the number of academies.

“The agency has built new systems so it can operate more effectively and oversee a system of financial accountability for academies that is more rigorous than the system for maintained schools.

“The agency has also achieved significant savings for the public purse in school rebuilding programmes — some 35 per cent cheaper than under the previous government.

“We thank the audit office for its detailed report and will consider its recommendations carefully.”

It comes after it was announced that the DfE was facing a second audit office probe — this time into its efforts to increase the participation of 16 to 18-year-olds in education and skills.