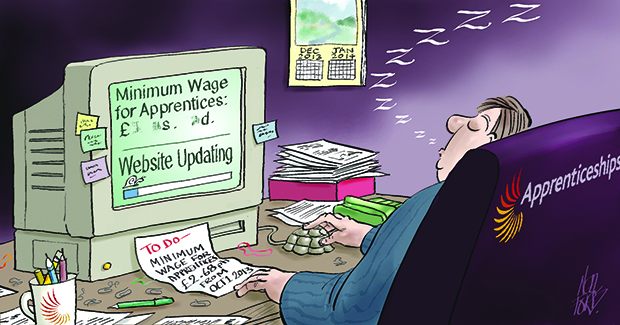 The National Apprenticeship Service (NAS) has acted to ensure all jobs on its vacancy matching website conform to the National Minimum Wage (NMW) — more than three months after it rose three pence to £2.68.

Companies had been advertising for apprenticeships that, according to the adverts, would have paid below the NMW.

It was scandalous that companies offering apprenticeships were advertising below the NMW.”

But last month NAS announced a change in the way its website works, eventually banning organisations from reopening and simply extending vacancies. They will now have to check new adverts before posting.

An FE Week investigation could not find any companies currently advertising apprenticeships below the minimum wage through the site, and the improvement has been welcomed.

But the delay in action from NAS has been criticised.

Joe Vinson, National Union of Students’ vice president for FE, said: “These changes are certainly welcome, but it is ridiculous that it took three months for the government to clamp down.”
The Skills Funding Agency (SFA), which runs NAS, said it had been in contact with employers regularly since the rise in the NMW went ahead.

An SFA spokesperson said: “Since the increase in NMW on October 1, 2013, we have been working with employers and providers to ensure that all vacancies posted after this date to Apprenticeship vacancies (Av) reflect the new rate.

“We also communicated this change to providers before and after the increase came into force, and continue to issue reminders, to ensure that all providers are aware of the changes.
“We also implemented a change to our Av system to ensure vacancies can only be posted at the NMW or above.”

In October, FE Week revealed how some adverts on the government’s apprenticeship vacancies (Av) website — including positions with sandwich shop Subway and other large firms — had not been adjusted to offer the new minimum rate for apprentices, which rose at the start of the month.

In many cases the previous minimum wage amount of £2.65 per hour was offered because at the time companies were able to simply extend or replicate existing vacancies advertised instead of creating new ones.

The problem had persisted despite a letter to advertisers in November asking them to be clearer about the wage and weekly working hours they were offering to make it easier for the service to check adverts.

Mr Vinson said: “It was scandalous that companies offering apprenticeships were advertising below the NMW.

“Apprenticeships should offer an opportunity to gain valuable skills and an insight into the reality of the workplace, as well as enabling you to study for qualifications to further your future.
“However, there needs to be some serious thought about how people will be attracted to taking up an apprenticeship when wages are just £2.68 an-hour.”

TUC general secretary Frances O’Grady said: “Changes in the way that apprentice jobs can be advertised may go part of the way towards solving problems with illegal non-payment of the minimum wage, but the move is not enough on its own.

“In the coming year there needs to be a strong focus on improving the quality of apprenticeships, and that must include ensuring they are properly paid.”

But in a message to users sent on December 18, the SFA said: “Since October, there have been ongoing issues with apprenticeship vacancies advertised below the current NMW of £2.68 per hour.
“Because of this, we have made changes to the way Av operates. From Friday, December 13, providers are no longer able to reopen or extend vacancies; instead, they must clone and check the vacancy before submitting for approval.”