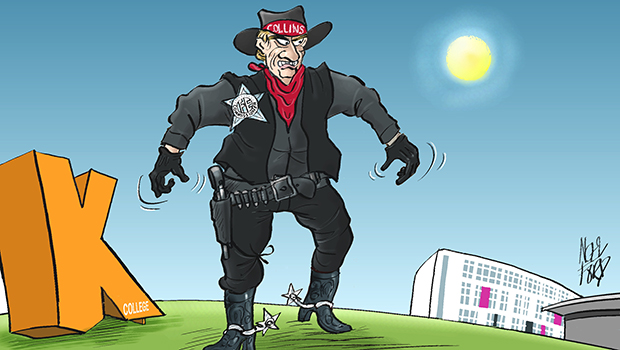 Troubled K College has been put into administered status after becoming the first college to come under scrutiny from the FE Commissioner following the damning Ofsted report, published this morning.

Skills Minister Matthew Hancock sent in commissioner David Collins and his team of advisers to review the college before the education watchdog’s report, which resulted in an inadequate grading, had even been published.

It was already in the process of being broken up following a failed merger and running up at least £15m of debt.

And the Ofsted report found that “continued uncertainty over plans for the college’s future existence is severely and adversely affecting the learner experience”.

It continued: “The quality of provision has declined and is not good enough in too many curriculum areas.”

The Minister said: “On this basis I have taken the decision to place K College into administered status with immediate effect.”

Administered status means the college will be stripped of powers over staff changes, expenditure or transfer of assets.

“It is therefore critical that under administered status K College moves quickly to address the weaknesses identified by Ofsted and the FE advisers so that we can find alternative local education provision for learners and employers.”

Ofsted found that the proportion of students successfully completing qualifications in key areas such as English, maths, apprenticeships and AS-level courses was “too low”, with students failing to make adequate progress or gain high grades.

Teaching, learning and assessment, success rates, management’s ability to keep track of student progress all came under fire and the rate of improvement was deemed “too slow”.

The report did acknowledge that the senior leadership team and principal Phil Frier had “stabilised a potentially chaotic situation” but that their efforts had failed to improve the impact on learners.

Mr Frier said: “Obviously all of us at K College are disappointed by the Ofted inspection report, but it is a judgement on the past.

“It should come as no surprise and was almost inevitable, due to the financial meltdown that we experienced in 2012, that the grades awarded indicate that the college currently has an inadequate rating.

“However, the narrative of the report clearly recognizes the progress that we have made this year to recover the financial position and improve the quality of teaching and learning.

“Importantly, our own self-assessment has proved accurate, demonstrating that we knew what the problems were and how to fix them.

“What’s emerged from this inspection is that the pace of our improvement needs to be faster.”

The college was in the process of being divided up and sold off in preparation for September 2014, with Canterbury College, East Kent College, MidKent College, Hadlow College, Highbury College, Ixion Group Contracts Ltd, SEETEC Business Technology Centre Ltd and NCG (formerly Newcastle College Group) all shortlisted in October to take on provision.

However, FE Week understands the bidding process has ended with no contracts being handed out.

Meanwhile, the latest college governing board minutes suggest chair Laura Ellis — BBC head of new media for the English regions — is stepping down at the end of the year. Vice chair Professor Ian Craig — from the Department of Social Policy at the London School of Economics and Political Science and Visiting Professorial Fellow at the Institute of Education, University of London — is also stepping down at the same time.

They are expected to be replaced from January, respectively, by current vice chair Jenny Hawkins, and Caroline Shaw.