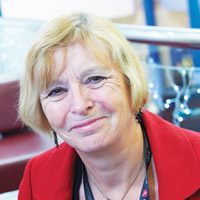 The Pheasant Inn, in Chippenham, has a lot to answer for in Christine Bullock’s life.

It was where she was once persuaded to take part in a pub crawl around the Wiltshire market town dressed as a ‘push-me-pull-you’ — a double headed pantomime horse — and where she met late husband Bob.

It was also where she had a conversation that would lead her from account management into education — something she said she’d never do.

“I just didn’t see myself as a teacher. I didn’t think I had the right skills,” she says.

Bullock was out for a meal with her then-boss at RHM Bakeries in 1979 when she met Mike Smith, a lecturer in business and economics at Chippenham College and mentioned that she’d done a degree in business studies.

“And he said: ‘We need someone like you at Chippenham College’,” explains Bullock, aged 60.

Inset: Christine Bullock with a fellow charity fundraiser and needlework and fashion lecturer Heather Akers (right), wearing a Push-Me-Pull-You costume in the Pheasant Inn in the early 1980s

“When I asked my boss what he thought he said: ‘Well there are lots of changes coming and I can’t guarantee a job for you in a couple of years’ time’.

“And RHM Bakeries, which was a very big company, disappeared two years later, so he was quite right.”

So Bullock applied for the college role having worked at RHM Bakeries for two and half years after graduating from Leicester University.

“A few years later Mike told me he’d have asked anybody who was anywhere near good because he was so desperate at the time,” she says.

“But saying I come from Malvern is quite misleading,” she says.

“My father was Serbian, he was a prisoner of war caught by the Germans in the Second World War, and came over here in 1948 as a displaced person.”

Bullock’s father, Zivadin Batachanin, was liberated by American forces, who, unwilling to send him back to newly-communist Serbia, gave him a choice between going to England or Venezuela.

“As he got older he spoke a bit more about the war, but not very often,” she says.

“He was lucky — he was on a farm Stalag so it meant it wasn’t as bad as some.

“In a soft moment he would tell us he would become friends with the German guards, but at times it was quite difficult — I think the food was limited sometimes.

“He did tell us the first night he was captured… they were sat in a field, and if they fell over they were shot, so they held each other up. It’s difficult to imagine it.”

Bullock’s mother, Freda, left home in Nottinghamshire at 16 and joined the Land Army, where she met Zivadin.

“I think that’s why I’ve always been so resilient,” says Bullock.

“They both did two jobs to make sure we had a nice home.”

Zivadin had just four years of education and taught himself to read and write in English. Bullock says this could be why FE appeals to her.

“Even though my mother had an English education and always worked hard, my father couldn’t help with my homework so I had to do it myself, so I have great empathy with people who come from backgrounds where they have got no help at home,” she says.

After making the leap into FE, Bullock stayed at Chippenham College of Technology for 19 years, apart from a brief stint at Salisbury College.

She describes herself as “ambitious” and was promoted quickly, changing jobs every few years.

“I got to head of department level quite quickly, met Bob and he already had two children so moving from Chippenham was out of the question and the only way to get further in education was to move around, so I stayed in middle management level,” she says.

“I never felt restricted because staying at the college — at the time felt like the right thing to do and I was happy there.”

Eventually, an opportunity came up at Edexcel, which Bullock says was “fantastic”.

She spent the next 15 years zig-zagging between colleges and awarding bodies, taking on vice-principal roles.

However, in 2005, while Bullock was vice principal at City of Bristol College, Bob was diagnosed with lung cancer. He died two years later, six months before his 60th birthday.

“Bob was bedridden for a while,” says Bullock.

“He went a lot sooner than we expected and my principal encouraged me to come back to work as soon as possible which was really good for me, it’s different for everyone but it was good for me and I’ll always appreciate it.”

“And Bob had a twin brother, and I wanted him and their parents to be able to celebrate what would have been Bob’s birthday.”

Bullock left City of Bristol College the following August to take up the post of principal at South Leicestershire College.

“Bob had always wanted me to be a principal and I thought I’d carry on to what I was going to do anyway and I think it was good to move on from Bristol then, as a change of scenery,” she says.

“When I first started at Chippenham, a lot of the secretarial lecturers were in their 40s and complaining about getting old, and I thought: ‘I’ll never be like that’,” she says.

“I was 60 two weeks ago, and I am pleased to say that I’m not like they were.

“I have embraced change and I’m trying to hold on, because how you choose to act your age depends on you as a person.

This desire to help people learn, she says, is “innate”.

“My father had it, my late husband was like that — looking after people — and my new partner, Rob, is like that too,” she explains.

“You can be ambitious for money and although we all know money’s nice, there are ambitions for your principles and your beliefs as well, and that’s quite important.”

I kept changing my mind. First of all it was a solicitor and then it was a market researcher. The last thing I wanted to do was go into education

Nelson Mandela. I’d have said that before he died as well. I’d probably invite some great sportsmen — David Beckham, Glenn Hoddle, tennis player Ilie Năstase, cricket player Basil D’Oliveira — and then William Shakespeare, Robbie Williams and Paul Newman, because he was lovely. And of course, my partner and family

We laugh a lot at work — that’s quite important. At home, watching sport, walking, holidays, going to pubs and listening to music