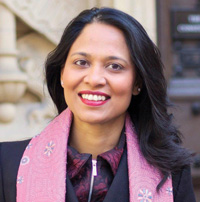 As Rushanara Ali’s staff show me into her parliamentary office, they seem understandably disorientated by her sudden change of focus from international development to education and young people.

But shadow minister Ali is unfazed by the results of Labour’s most recent reshuffle.

She seems to be in her element with her new shadow ministerial brief and once she begins talking on the subject, it’s difficult to interrupt.

She is, she tells me, “completely obsessed” with education’s power to influence social mobility.

The 38-year-old MP for Bethnal Green and Bow credits her own education in London’s East End with her position today.

“I went to some great schools, I was really lucky actually,” she says, looking particularly to her secondary school, Whitechapel’s Mulberry School for Girls.

“The teachers were very, very ambitious for their kids, it was just brilliant.

“They had a very strong sense that it didn’t matter what your background was, you could go anywhere if you put the work in and if you were ambitious and determined.”

The first Bangladesh-born person to enter UK parliament, Ali came to England when she was six.

“I remember it being grey and cold,” she says.

“I had a lot of family out there [in Bangladesh] — grandparents, aunts and uncles, a large extended family so arriving here was very different.”

When Ali’s family moved to England in the early 1980s, the London Bangladeshi community was less established, making the contrast between her life in Bangladesh and her new life in Tower Hamlets, East London, more apparent.

“If you have an upbringing in a country that’s completely different, childhood memories tend to stick,” she says.

“Like all children you miss where you’ve come from but very quickly you adjust to life.”

Education formed a key part of her family life, as her parents were “very supportive” although in different ways.

“My mother was very, very strict and everything was about studying, whereas my father was much more laid back, his attitude was that you should do what you’re interested in, which was a good balance actually,” explains Ali. “It was very much a case of ‘education, education, education’ from a very early age.

“There was a discipline of not wasting time, so when we arrived in England, as well as going to school, my mother was absolutely obsessed with us learning Arabic, English and Bengali — she had her programme and she was determined we would get through the education system and there was no getting away from her.

“All the hours would be taken up in some form of education — in the weekday evenings, it was school and then it was more classes.”

Grinning broadly, and clearly not resenting the time dedicated to her education, she adds: “I think the only playtime we had was on a Saturday and Sunday afternoon, it was pretty intense.

“But she probably didn’t know what she was getting herself into when I stood for parliament.”

Ali went on to study at Tower Hamlets College where she returned to become a governor before she was nominated to stand for election in 2010, and this, she says has made her “a passionate advocate of the FE system”.

“When I got to Tower Hamlets College, I was meeting a lot of people who’d gone back to college as mature students,” she says.

“So that was a really powerful influence for me because if you’re in a school sixth form, you’re with the similar age group, but at college you get a real insight into the different points people are starting at and where they end up.”

She left the East End to study politics, philosophy and economics at St John’s College, Oxford, but returned in her holidays to conduct research for renowned sociologist and social activist Michael Young, talking to youth workers and young people.

On finishing university, Ali found she was drawn towards human rights law, but, not really wanting to study for and also finance a law degree, she instead got a job with the then-MP for Bethnal Green and Bow, Oona King, who was also on the international development select committee.

Now, 15 years on, she has come to occupy that constituency seat herself, something she says she’s “incredibly proud of”.

“It’s hugely exciting, but a big responsibility, I think if it’s your home seat, if it’s the place you grew up in you have a special connection, you know a lot of people in the area,” explains Ali.

“The insights you get from a long span of your lifetime really help you to get across where the blockages are, where the problems occur and how those can be overcome.

“Also, I think what’s great is that when I say to young people ‘I went to your school’ or ‘I went to your college’ it doesn’t feel as detached for them.”Ali, along with fellow Labour politicians Shabana Mahmood and Yasmin Qureshi, was one of the first female Muslim MPs in the UK.

She was also the first person in her family to go to university and the first student from her school to go to Oxford. With so many firsts on her CV, questions about being a ‘role model’ are difficult to avoid.

“I think in terms of when I decided to go to university, it was about what I wanted to do, it wasn’t really about what then it symbolises,” explains Ali.

“But you are very aware, just like women in parliament, the first intake of women in parliament would have been very aware of the fact that there are others who would look to them — that happens.” And, she admits, role models have their place in “demystifying” aspirational places like university or parliament. “Certainly when I went to Oxford, one of my friends went to Cambridge and I think we were probably the only two in the borough who did, and that was important because our teachers could say to their kids ‘you should not see Cambridge and Oxford and all the Russell Group universities and so on as places you can’t get to’,” she says.

“That’s why I’m really keen that there are more people from diverse backgrounds who go into politics because then it becomes self-evident, it becomes normal and these places become places that anyone can feel that they can get into if they do the work.”

Perhaps the reason Ali seems so poised to make a smooth transition to her new brief is that she sees them as part of the same continuum of improving people’s lives and social equality.

“A lot of people say this I know, but education really is the key to all the other things that happen in the community or in a country, and that’s certainly what I saw in the east end of London,” she explains.

“For many people, the transformation of education has really transformed their lives. And that’s a very powerful story.”

The Handmaid’s Tale by Margaret Atwood. It takes me back to my FE College, actually, I had these amazing English literature teachers Mary Jones and Helen Coxidge, and it was brilliantly taught

If you could invite anybody to a dinner part, living or dead, who would it be?

Friends, reading novels, family, films — although I rarely get time to go to the cinema now

I actually wanted to be a teacher when I was 10 or 11, then I realised how hard it was — but there’s still time. Then I wanted to be an archaeologist. I think that had something to do with Indiana Jones