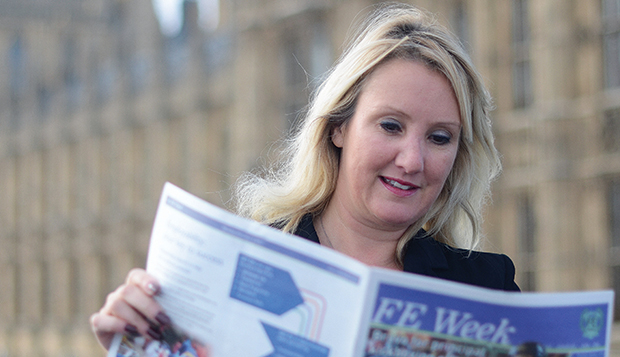 Poor adult numeracy and literacy levels in England and Northern Ireland were the subject of a House of Commons debate.

It was prompted by findings from the Organisation for Economic Co-operation and Development (OECD), which warned of some of the highest proportions of adults scoring at or below level one — the lowest possible level — in numeracy, where adults can only perform basic mathematical processes.

It stated: “In fact, 24.1 per cent of adults, around 8.5 million people, scored at that level, compared to the average [among participating countries from across the world] of 19 per cent.”

Tory MP Caroline Dinenage (pictured), who secured the Commons debate on Thursday, said: “I am angry, frustrated and desperately sad that we have failed so many generations over this issue.”

The OECD report further indicated that around 16.4 per cent of adults, or around 5.8 million people, in England and Northern Ireland scored at level one or below in literacy, which is closer to the average of 15.5 per cent of adults among all participating countries.

At level one in literacy, adults can only read brief information on familiar topics.

England was also the only country surveyed where the oldest age group (55 to 65) had higher proficiency in literacy and numeracy than the youngest group (16 to 24).

Skills Minister Matthew Hancock told fellow MPs: “It was a shocking report and it will reverberate down through the education debate in Britain for many years.

“I hope it will persuade many who are sceptical or resistant to the reforms being put in place to come onside and support more rigour, and support stronger maths and English within schools.”

He also announced the launch of a programme to produce more FE maths teachers. It is understood the programme would involve the retraining up to 600 existing FE teachers by the end of the current academic year.

They would cater for thousands of extra pupils now expected to have to study maths at college because they had failed to achieve at least a C grade for GCSE, or equivalent qualification.

“Of course, good teaching of English and maths requires good English and maths teachers, so we are today announcing new Department for Education support for the National Centre for Excellence in the Teaching of Maths to develop a maths enhancement programme to upskill existing teachers of maths in further education,” added Mr Hancock.

Labour MP Barry Sheerman said there would be no easy solutions to improving numeracy and literacy.

He said: “It is something that has evaded all governments from all parties for a considerable length of time.”