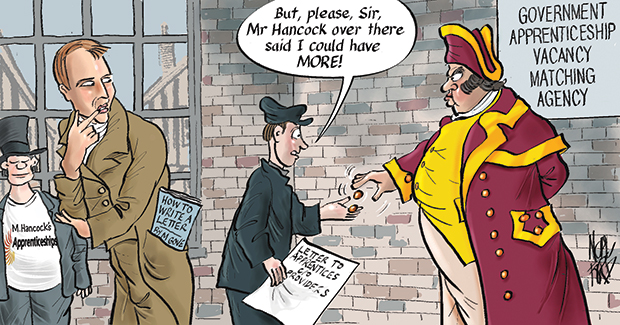 Skills Minister Matthew Hancock has written a letter for every apprentice telling them what they should be earning — despite hundreds of adverts for underpaying apprenticeships remaining on a government-funded website.

The letter, which will be distributed to apprentices starting from October 1 by providers, outlines the minimum wage for 16 to 18-year-olds as £2.68 an-hour.

Mr Hancock’s message says: “Your employer will support your training and pay you at least the hourly National Minimum Wage.”

It comes with the government’s Apprenticeship Pay Survey having recently been released, showing 29 per cent of the 5,635 apprentices were underpaid in 2012, a jump of 9 percentage points on the year before.

Meanwhile, underpaying apprenticeships are still being advertised on the National Apprenticeship Service (NAS) website, even after FE Week highlighted the problem to the Skills Funding Agency, which runs NAS.

More than 600 jobs were being advertised on the website earlier this month paying £2.65 an hour— the minimum rate before October 1 increase. And many were still on the website almost a week later.

However, an agency spokesperson said: “We have put measures in place to ensure all new vacancies being posted adhere to the increased apprenticeship national minimum wage rate, of at least £2.68 per hour.

“We have written to all training organisations and employers reminding them of the new rate.

“We are currently in the process of contacting any training organisations and employers where we have identified adverts, posted before October 1, that are still displaying the old rate.

“To date we have experienced good co-operation on this matter from our training organisations and employers, and they are in the process of changing the rates online.”

The government’s Apprenticeship Pay Survey echoed the findings of the Low Pay Commission’s 2013 report published in April, which found that a similar number — just over 27 per cent — of all apprentices were underpaid.

TUC general secretary Frances O’Grady said: “These findings are shocking and show how many apprentices are currently seen as little more than cheap labour.”

An agency update to providers sent out on Wednesday said Mr Hancock’s letter was in response to the April report, and told providers to ensure the letter was issued “to all new apprentices starting on or after 1 October 2013” — excluding higher apprentices, who are covered by separate regulations.

The letter explains what wage entitlements are for apprentices in each age category, and gives the number of the pay and work rights helpline.

An agency spokesperson told FE Week it would be monitoring whether providers were giving out the letter through its relationship teams.

She added: “We would expect training organisations and employers to want to do this so they can ensure that the apprentices they have just taken on have the information they need on their pay and benefits.”

And Mr Hancock himself is setting a good example, paying his apprentice well above the minimum wage at £6.31 an-hour.

His current apprentice is coming to the end of his 12-month job and so the minister is looking for a new parliamentary apprentice in Westminster.

The programme combines on-the-job training working for Mr Hancock with a formal level three qualification in business and administration.