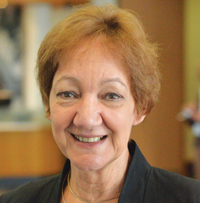 Diana Laurillard, 65, is a woman on a mission. The Institute of Education’s professor of learning with digital technologies wanted to be a university lecturer when she was a teenager and achieved that ambition by the time she was just 25 years old.

And, she concedes: “That’s too soon to achieve your life’s ambitions. You need to be older than that, certainly mid-forties at least, or it leaves you in a position where you’ve got to reinvent yourself and say ‘who am I?’ and find a new mission in life.”

Fortunately, she didn’t have long to wait. As a research assistant at Southampton University in the early 1970s, Laurillard was shocked by the abilities of her students.

“All these students had passed A-levels or equivalent in order to get on to the course, but they just didn’t understand mathematics,” she says.

“So that was the beginnings of a mission — how can you can go through all that teaching and learning, pass exams, but not understand maths and not love it?”

Laurillard’s career seems to have been driven by this mission to improve teaching, first for her own students. While trying to help that initial class at Southampton, she stumbled upon some BBC resources for the Open University.

“I discovered they had some great television programmes on mathematics, where they used graphical computer simulations of, for example, the limit of theorems in four dimensional geometry — things that were really hard to understand,” she says.

When I got to decimals, I couldn’t make any sense of what they were saying”

“They were really great, so I’d use them in lectures — but that got me interested in the idea of what you can do with computers and teaching.”

Laurillard went to the university’s computer department and asked if it could develop some simulations of its own.

“It was in the days of computing where you would hand a bunch of printed cards and paper tape for a program, then wait a week and it would come back with ‘syntax error’ or something,” she explains.

“So asking ‘could we please do some computer simulations?’ was not a good question.”

But, undeterred, Laurillard took a job with a national development programme for computer-assisted learning. It was a move down a career path that would lead to a pro-vice chancellor’s post at the Open University and also one of civil servant.

“The way I thought about it was I would spend two years making simulations, then I’d be able to go back to my university and be the maths teacher I really wanted to be,” she says.

“However, the world isn’t like that and although we did create some great graphical simulations, we then got more and more into the business of saying ‘how could we develop it further? How can we take it into other subjects?’

“So I never went back to teaching, I will do. When I retire one day, I’ll do something like that.”

Laurillard’s love of maths stems from her childhood. “I was the kind of child who would do IQ tests for fun. I liked being the first one to finish in a class — I just enjoyed it so I did it naturally,”  she says.

But she does recall one instance when she struggled with maths, which has, she says, been important throughout her career.

“When I got to decimals, I couldn’t make any sense of what they were saying,” explains Laurillard.

“I realised the reason I was struggling so much was the metaphor I was taught of moving the decimal point when you multiply by 10. I thought ‘why?’ and there was no good answer.

“It’s a very misleading metaphor, because the decimal point is the one thing that doesn’t move, so it’s sort of setting you off on the wrong track in how you model what’s going on.”

These teaching techniques, she says, are geared towards getting students to get the right answer to the question in front of them, rather than understand the underlying maths.

“You can see that time and again in the way kids talk about maths. They will parrot some rule without having a clue what they’re talking about,” she says.

“So that was a good experience for me, because most of the time in school I had no problem with it.

“It’s a problem for a maths teacher if you can’t relate to the way your student is thinking — you’ve got to listen to the way the student talks about it.”

The idea of listening and explaining is something Laurillard says she carried over to raising her own children Amy, aged 29, and Anna, 26.

“They’re great arguers and this can be a problem, but our whole child-rearing process was about negotiation, making an argument for your case — we very rarely had to tell them what to do,” she says, proudly.

Laurillard married Brian Butterworth, professor of cognitive neuropsychology and University College London, in 2010 — even though the couple have spent almost 46 years together.

“I never would have gone for marriage at all, because I distrusted it and disliked the whole thing,” she says.

“I’m of that disposition — terribly unromantic,” she says briskly.

“Every romantic film ends with marriage. If it begins with marriage, then it’s a romantic comedy, or it’s going to go wrong, or it’s Doris Day and you can’t aspire to that.

“And in the sixties, wives were effectively second-class citizens and I just thought ‘no’.

“So we held out against marriage. It was fine as it was, thank you.”

Finally, financial considerations and concerns about travelling eventually forced them to relent.

“There was this very romantic proposal from Brian,” Laurillard says wryly.

“Something like ‘Are you going to be free to pop into Camden registry office on your lunchbreak?’

“We really downplayed the whole thing — there were just the two girls and us and we cut out everything until the bare bones of it were left. It was hysterically funny — even the registrar was in hysterics. Then we went and had a slap-up meal and went back to work.”

And with combined interests in math and psychology, the couple have collaborated on work studying dyscalculia — a learning difficulty similar to dyslexia where the sufferer struggles to understand numbers.

Butterworth studied the condition from a neuropsychology perspective, while Laurillard examined the education side of things. Her desire to solve problems in the classroom is probably derived from her love of maths and abstract problem solving, she says.

“I do have a sense that there is a right answer to the ways in which we change education, for instance, and, I think there’s an essence to what’s involved in enabling a learner to get the point about subtraction, for example,” explains Laurillard.

“There’s a way to do it and I’ve just got to discover what it is and work at it.”

The Tin Men by Michael Frayn

If you could invite anyone to a dinner party, living or dead who would it be?

Robert Louis Stevenson and Mark Twain, because although they’re both novelists, it’s their travel writings that are absolutely wonderful

First, I wanted to be a vet, and then I wanted to be [1960s French nightclub singer] Juliet Gréco, because she was cool, very sexy and hung out with philosophers and I couldn’t imagine anything better