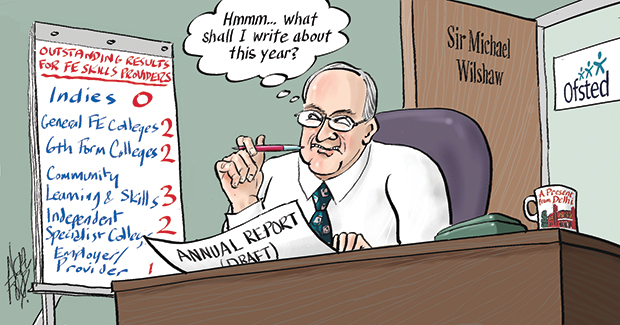 The sector has failed to achieve a single grade one result since the start of the last academic year, when the new framework was put in place.

But across the wider FE and skills sector up to July — from more than 320 inspections — there were 10 outstanding results under the new framework, including two for general FE colleges and two for sixth form colleges.

The last ILP to achieve a grade one was Hillingdon Training Limited, in Ruislip, Greater London, in October last year, when it had around 430 learners.

It had been inspected under the previous framework, introduced in September 2009 and under which there had been 21 ILPs graded as outstanding.

Stewart Segal, chief executive of the Association of Employment and Learning Providers, said: “The new inspection framework is only a year old and providers need time to work with Ofsted to understand the standards and deliver the service to customers that meets those standards.”

He added: “Teaching, learning and assessment is a key part of the new framework and it is important that providers are able to demonstrate good practice when delivering in the wide variety of work-based locations.”

Under the current framework, Ofsted inspectors have dished out a dozen inadequate ratings to ILPs, the most recent of which came for Bury-based Training For Travel on September 20. It was the first and, as of Wednesday morning (September 25), only inspection result for the sector this academic year.

The 2,000-learner provider also got grade four results in each of the headline inspections fields having earned a grade three result following its last inspection, in December 2009.

Its chief operating officer, Beverley Platt, said she was considering an appeal against the grade four result, but declined to comment further.

Meanwhile, under the current inspection framework, there have also been 54 grade three, or requires improvement, judgments against ILPs along with 65 at grade two, or good.

But with around two months to go before Ofsted boss Sir Michael Wilshaw’s annual report comes out, many in the sector will be hoping for a grade one result soon having seen colleges come under heavy fire in last year’s report. The chief inspector said government needed to “shine a spotlight” on the FE sector, pointing to a threefold increase in the number of colleges graded as inadequate — from four in 2010/11 to 13 the following year.

Nevertheless, Mr Segal remained upbeat about the ILPs and said the association was looking to run a pilot course aimed at improvement.

“Despite the newness of the framework, it looks as if more than 30 per cent of providers have improved their grades and only 16 per cent have had worse grades,” he said.

“As always, any provider getting worse grades is one too many.”

He added: “We are currently working on a programme that builds the capacity to improve in the sector.

“We hope to run a pilot programme with providers that need to improve by the end of the year.”

An Ofsted spokesperson confirmed there had been no ILPs graded as outstanding under the new inspection framework.

However, she said Ofsted would not comment on the sector ahead of the annual report’s publication.