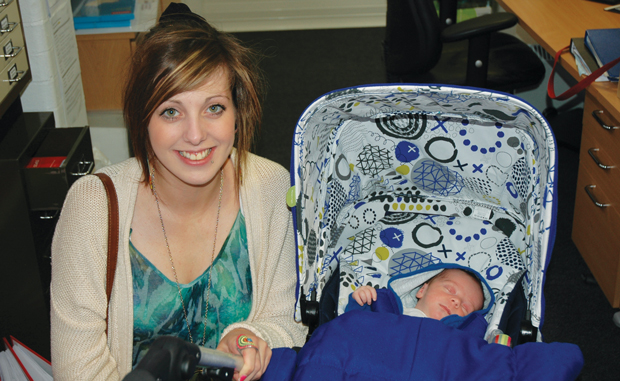 Angel Lynch knew hair and beauty wasn’t right for her — and so she set off on a new path in which she would overcome dyslexia and balance engineering studies with caring for a new-born son, writes Rebecca Cooney.

In a hair and beauty class at Basingstoke College of Technology (BCoT) in 2012, students were getting to know each other by asking the class questions.

When it came to Angel Lynch’s turn, she asked “What’s your favourite car?”

Looking at the sea of blank stares in front of her, Angel realised the course probably wasn’t for her.

Angel already knew her real passion was for engineering. It was something she realised when she was just 12.

“There aren’t a lot of girls in engineering, but getting my hands dirty. suits me.”

She added: “I only lasted a week.

“It wasn’t me at all, I’m not very girly and it was just all about nails — and more nails.

“I wanted to do massage originally, but you had to do a whole year of just beauty first, and I thought I could stick it out, but it really was not for me, it just wasn’t my environment.”

She dropped the beauty course and set out to pursue her dream of studying engineering, and has now happily enrolled on a combination of mechanics, engineering and management courses.

“It was hard work, but it was 100 per cent worth it,” said Angel, from Basingstoke.

But first she had to deal with the birth of her son, Charlie, and before that, a diagnosis of dyslexia.

“It did make sense when I found out about the dyslexia, even though it was a bit of a surprise,” said Angel.

“There wasn’t really a lot they could do to help me because I was so late on through the school, so I didn’t get any GCSEs in the end. It was a bit of a scary position to be in.”

Angel started the hair and beauty course, first at her school sixth form, then at BCoT, before deciding she had nothing to lose and so pursued her engineering dream.

She spoke with BCoT engineering tutors, who accepted her on to their course.

“They didn’t seem bothered about my GCSEs, so I enrolled on the level two course in electronic engineering, as well as English and maths,” she said.

At first, Angel struggled with the workload, but just as she was finding her feet, her life changed dramatically.

“I found out I was pregnant in October, so I hadn’t been on the course for long,” she said.

“I was really ill throughout my pregnancy, and I didn’t think I was going to be able to finish the course.

“But I went to my tutors and told them what was going on.

“They were great, they changed my timetable and I asked them to give me the work and activities I was supposed to do early, so I could do a lot of work at home.”

The help, and Angel’s own determination to succeed, saw her complete her studies.

“At the moment, I’m trying to decide between mechanics and electronics. I was thinking if I do mechanics I’d like to go and work for Volkswagen because they’re just a company that really interests me,” said Angel, whose favourite car, incidentally, is a VW Golf.