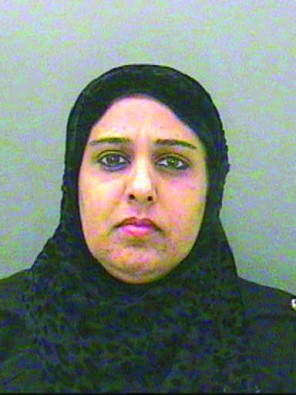 A Lancashire college purchasing officer has been jailed for a year for using a work credit card to splash out more than £21,000 on solicitors’ bills for her divorce and trips to Alton Towers and Florida.

Shaheda Lorgat (pictured) illegally used a Blackburn College account to pay for a host of personal items and services. She was given a 12-month prison term at Preston Crown Court on Tuesday, September 17.

The 42-year-old, of Mossdale, Blackburn, had pleaded guilty to 19 counts of fraud by abuse of position. Lorgat got concurrent 12-month jail sentences for each count.
The offences took place between July 2008 and January last year.

Defending, Leila Ghahhary said: “When her husband left her, she felt a desperate need to pretend to the outside world that everything was okay.
“Her state of mind and emotional anxiety and the stress she was going through at the time led her behave in a way that projected something totally different, hence the
spending.”

Recorder Robert Crawford told Lorgat: “All these things you did with public money that should have been spent on an educational institution.”
PC Anita Whittle, from Blackburn Police, said: “I am pleased with the sentence, especially given the amount of money spent on Blackburn College’s credit card which was there to be used for things that benefit the college and its students.”