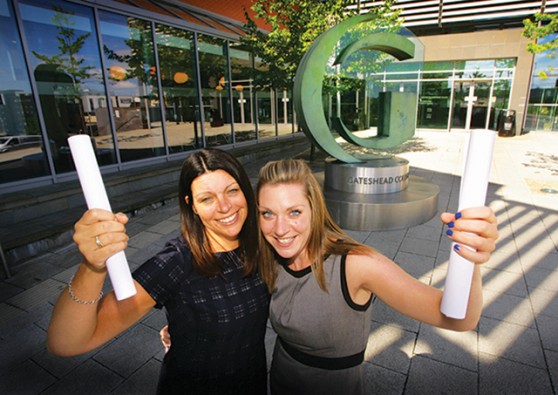 Natalie and Juliet Hodson, from Jarrow, achieved top grades in their leadership, management and organisation degrees at Gateshead College while looking after young families.

“It was a juggling act to say the least,” she said.

“We have physio appointments every two weeks and we have to go and see a consultant regularly as well, so we had that to deal with too.

“But I think if I can do it in my position with a little boy with a bone disease as a single parent and working full-time, anyone can do it. I daresay a lot of it was to do with the tutors at Gateshead.”

Meanwhile, 43-year-old Juliet was looking after her own two children while holding down her job as a performance and information support officer at South Tyneside Council.

“I don’t suppose many people get the opportunity to go to university with their sister, but we thought ‘it’s going to be hard but we’ll get through it together,” said Natalie.

“If one of us was feeling a bit down or a bit stressed, the other was there supporting them knowing what they were going through.”

She decided to go to college when she saw a niche she could fill at work.

“Obviously the market was dipping a lot at the time so I thought I’d do something to make myself more valuable and give myself something extra.”

After completing an Association of Accounting Technician qualification at level three and an NVQ level four in business administration, it “snowballed” from there, said Natalie.

Juliet also found she needed to gain new qualifications to progress in her job and her sister’s course caught the eye.

“I’d already enrolled on the course and I showed her what we were going to be covering and Juliet said ‘that’s exactly what I need’,” said Natalie.

Juliet is now developing her own business venture — an innovative bra design that has already won support from the Gazelle Colleges group, which gave her a £4,000 award to develop the idea.

“The degree has given me the confidence to take my business idea forward and develop it into a viable commercial venture,” she said.

But while Juliet plans to conquer the business world, Natalie has been bitten by the study bug and said she wanted to become a postgraduate student.

“Once you’ve started it’s really hard to stop,” she said.

From left: Juliet and Natalie Hodson