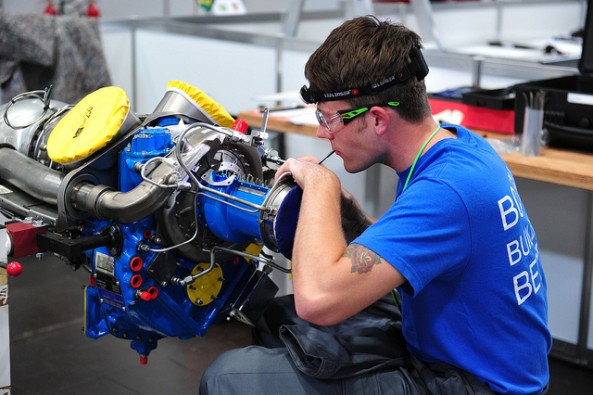 If Tuesday night was all about the spectacle of the opening ceremony, yesterday it was down to serious business as the first of four days’ competition got under way.

Chris Henwood and I arrived on site mid-morning and the venue was packed with German schoolchildren.

A large proportion of yesterday’s visitors were primary age youngsters that had taken part in WorldSkills’ One School, One Country Initiative.

It was great to walk around and see their faces light up when they first got sight of some exciting machinery or the sparks fly from a welder.

WorldSkills Germany has certainly organised a very slick and impressive competition so far.

We have been on site for three days and the soles of my shoes are in need of being replaced. The site is huge. Really huge. Officials are having to make use of Segways and kids’ scooters to get around.

So, after a long day of interviews my feet could not handle racking up any more miles, so I borrowed an officials scooter (see the picture).

But back to business, and much of yesterday was spent familiarizing ourselves with the competition venue and the locations of Team UK competitors.
We were fortunate enough to spend some time with WorldSkills president Simon Bartley.

We met him at his makeshift office suite, right next to the competition halls.

Mr Bartley was as enthusiastic as ever about the importance of competitions and certainly looked proud of the event that was taking place under his watchful eye.

You can read the full interview with Mr Bartley in our WorldSkills supplement – published Monday, July 8.

Following the interview it was time to trek through the site over to the competitors’ dining area.

We waited outside with other media for competitors to come out after their first day’s work.

It felt like we were waiting outside the theatre stage door for a glimpse of the lead act.

For the UK we have more than thirty lead acts in Germany and they had put on a stunning performance so far.

We managed to catch around a third of competitors, all of whom were chuffed with their performances.

Some reported back the odd technical challenge they had, but we didn’t speak to one competitor who felt down about their challenge.

Team UK bricklaying competitor Ashley Terron spoke to me just before his dinner.

He was elated by his performance from day one.

“Overall, today has gone really well and I am very pleased with my work so far. Although it has now all gone smoothly today,” he said.

“Earlier this afternoon my saw broke, I was without a solution for about ten minutes. I panicked at first, but quickly composed myself and sorted it out.”

While ten minutes might not sound a great deal of time when competing for more than 22 hours in four days, Ashley said such delay could make all the difference.

“We have three separate project to build over the fours days. It is for us as competitors to decide the time we allocate to each one,” he said.

“I have planned all three between seven and seven and half hours. Ten minutes can make all the difference. Fortunately, I will get those ten minutes back.”

We will back on site today, from around 9am, ready for day two competition. You can follow our updates on Twitter: @shanermann and @chris_Henwood.

Check out this great video of day on of competition for Team UK:

Below are a few pictures from the day: