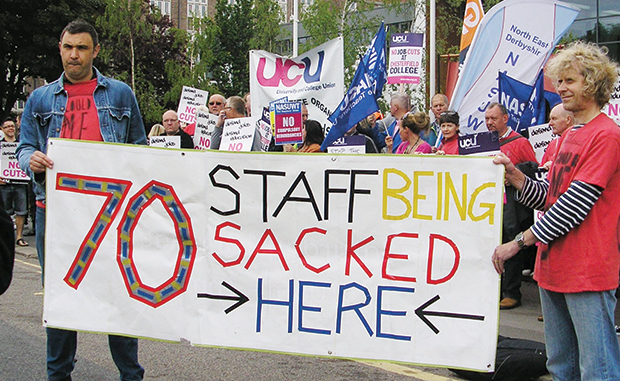 The announcement of up to 700 job losses in eight colleges in England has prompted industrial unrest.

Members of the University and College Union (UCU) at Chesterfield College and Kirklees College, have already taken industrial action, while union members at The Grimsby Institute have voted to strike.

All the colleges have blamed the redundancies on budget cuts.

He added: “Taking into account voluntary redundancies and staff redeployment, our current estimated figure of required reductions in staffing is now 43 . . . so we have made some headway in alleviating the impact of this staffing restructure.”

Principal Peter McCann said: “We will be doing all we can to avoid compulsory redundancy”, adding that the college would work to facilitate staff redeployments.

“We will seek to manage this process as supportively as is possible within the enormous financial constraints we are under.”

A statement from The Grimsby Institute, where one in five teaching jobs is to go, said the college was trying to keep job losses to a minimum, and was “disappointed” by the ballot to strike.

It added:  “The institute has been working through its proposals with the union for some time and has been very clear in outlining the reasons for the proposed changes.”

A statement from Lambeth College, where 97 people face job losses, said the college aimed “to review and consolidate” its curriculum and was “looking to actively support” affected staff.

It added: “We will continue to re-align our workforce to meet the changing demands of our learners and employers.”

City of Wolverhampton College announced 95 job losses, more than 10 per cent of staff.

Principal Mark Robertson said the college had sought to minimise the impact on students and hoped large savings could be made through voluntary redundancies.

Angela O’Donoghue, the principal of South Essex College, which is facing up to 76 job cuts, said: “The current position in the sector is unprecedented and it is vital we address these funding issues quickly and efficiently.”

The college statement added the posts would be management roles to “limit the impact on frontline teachers”.

A statement from Central Sussex College, where 200 jobs could be lost, said funding cuts had been exacerbated by “an over-estimation of income under the previous management” leading to a budget shortfall of £6.5m for 2012/13.

New principal Sarah Wright said: “The new senior team is committed to re-shaping the college to maintain all that is good about the college whilst achieving financial stability and viability.”

A statement from Lowestoft College, where 27 jobs are at risk, said: “We are very sad to have had to notify staff of these changes but the cuts appear inevitable in the face of funding restrictions.”

UCU head of FE Barry Lovejoy said “knee-jerk cuts” were not the answer.

He added: “The government’s punitive cuts agenda is causing problems for colleges across the country.

“We want to work through each college’s problem and do not accept that slashing jobs, pay or staff terms and conditions is the correct approach.

“Any jobs cull simply increases the workload of the staff that survive and seriously risks the quality of education a college can offer.”