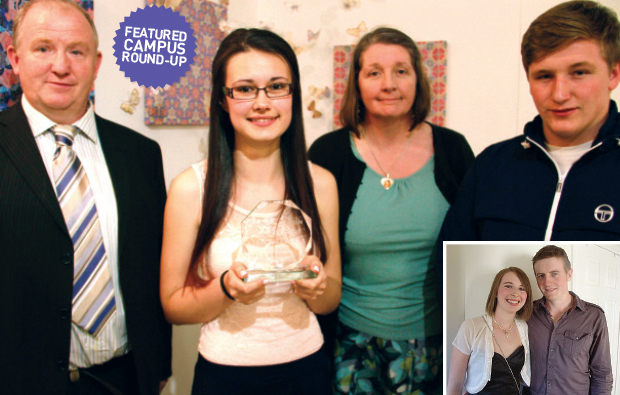 An award at the Cleveland College of Art and Design remembers an outstanding student who always thought of others. Rebecca Cooney reports

A young designer in Derbyshire has won a college award dedicated to a former student who lost her battle with breast cancer last year.

Cleveland College of Art and Design (CCAD) student Charlotte Hall, 18, is the first recipient of the Sophie Cutts Excellence Award for her textile designs based on butterflies.

Her parents Tracy and Craig, with her tutor Lynne Carverhill, dedicated an award in tribute to her talent and commitment to her studies.

“We were thinking we would like to have an award . . . and then Lynne got in touch as she was thinking along the same lines,” said Tracy.

“The big thing for all of us was that she was so young and so talented, and had a lot to give from her own ideas of design.”

After completing her studies at CCAD, Sophie went on to Edinburgh’s Heriot-Watt University. Her family collected her first-class degree on Friday.

“After her diagnosis and although she was poorly, she still had the commitment,” said Tracy.

“She finished her third year of university while having chemotherapy and after a huge operation and… was still focused, still excited about design.

“We wanted other designers to be inspired by Sophie; to follow their dreams even through the depths of darkness.

“We thought it would be nice to recognise somebody who had her qualities. It’s a nice way of saying to someone ‘you’re really good at designs, you’re a really good human being and your attitude to work is exceptional’.”

Charlotte, from Darlington, won the award for a final year project that the college said showed the same quality, commitment and attention to detail as Sophie’s.

“I was genuinely shocked because there was so much amazing work,” said Charlotte, who hopes to become an interior designer. “It is a real honour to receive the award.”

Lynne Carverhill said: “We felt we wanted to do something to celebrate the life and work of Sophie as she was a truly outstanding student.

“We wanted to remember her for the good things and to raise awareness that even if you are 21 you can get breast cancer.”

Tracy said: “When she was diagnosed, her doctors kept saying ‘but you’re too young’ and she wanted young people to know . . . they should be checking their bodies and being aware of the factors in cancer.”

Sophie’s dream was to use her talent to help others.

In her third year at university, she designed scarves for the holistic unit at James Cook Hospital, where she was being treated, for patients who were losing their hair.

“She wanted to produce a design so when people her age were offered a wig or a scarf there was a trained designer there giving a designer edge,”  said Tracy.

“Always thinking of others, that was who she was. We wanted to share that with the world and say ‘look at this wonderful person’. Here she was in her own distress and she just said ‘you’re not going to stop me’.”

Sophie’s family are now making sure that her designer scarves will be available to patients at the hospital unit.

“If Sophie were here, she would be going forward with her own business,” said Tracy. “It’s for us to say look what the world is missing, but you’re not going to miss out on her designs.”