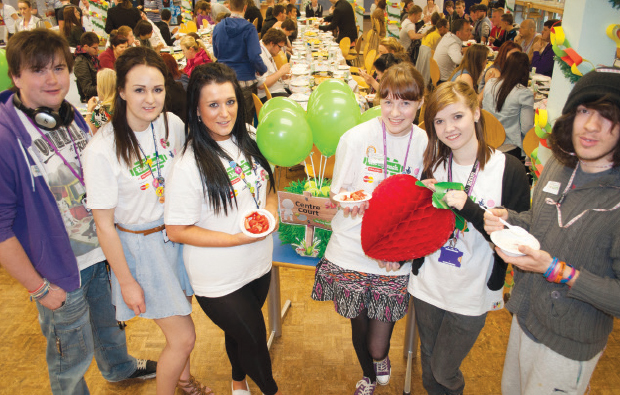 A students’ union in Nottingham served up a Wimbledon themed lunch to 150 people to celebrate the hard work of some of its top students.

Each school of learning at West Nottinghamshire College nominated its 15 top achieving students to attend a ‘Big Lunch’ buffet that featured a guest
magician, free drinks and food — including, traditional Wimbledon strawberries
and cream.

The ‘Big Lunch’, which started at the Eden Project in 2009, aims to get people to have lunch with their neighbours to promote community, friendship and fun.

Learner voice co-ordinator Sue Harries said: “The atmosphere was fantastic and everyone had fun and enjoyed each other’s company and the entertainment.

“It proved to be a great chance for students from different schools of learning to meet people they’ve never met before . . . there was a wonderful sense of camaraderie.”

Featured image caption: Top performing students got to know each other at the Wimbledon-themed Big Lunch