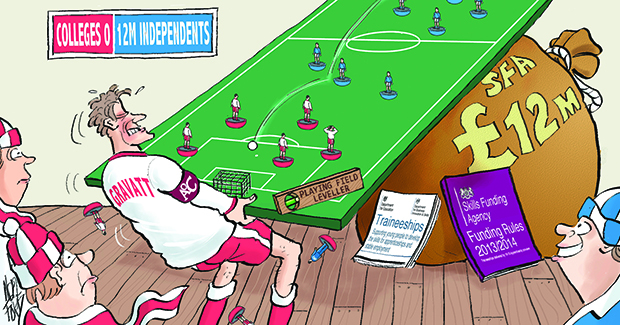 Colleges look set to miss out on £12m handed over to the Skills Funding Agency (SFA) for traineeships, FE Week can reveal.

The Department for Education (DfE) has transferred the cash to agency coffers to pay specific traineeship providers through their 16 to 18 apprenticeship contracts.

The ring-fenced funding has been made available for next year to providers who only hold agency contracts, mostly private training providers.

The extra funding will not be on offer to providers with Education Funding Agency (EFA) contracts, so bypassing most colleges.

A DfE spokesperson said current funding was expected to cover traineeship costs for those with EFA contracts because the programme would “replace other level one and two programmes” that were already funded.

However, Julian Gravatt, assistant chief executive at the Association of Colleges, said he wanted to see colleges get “similar opportunities” to the private training providers.

He also wanted the traineeship age limit lifted. Currently, only people aged 16, 17 or 18 on August 31 in the relevant funding year will be able to become trainees, along with young people up to the age of 25 with learning difficulty assessments.

“Traineeships will start at the same time as the new approach to study programmes so 2013-14 will be a complicated year,” said Mr Gravatt.

“We believe that traineeships will work well if they are strongly linked to apprenticeships so we are relaxed about DfE finding a short-term fix to allow independent providers to claim funding, but we’ll be pressing to ensure colleges with strong apprenticeship programmes have similar opportunities.

“The bigger issue, though, is to ensure that trainees are able to support themselves and to remove the current age cap.”

The DfE spokesperson said: “We need to make sure that vocational training is high quality, rigorous and meeting the needs of today’s employers.

“Any good or outstanding providers — whether contracted through the EFA or the SFA — will be funded to offer young people traineeships.

“This investment of £12m . . .  will mean that the SFA’s best apprenticeship providers will now be able to offer young people traineeships as well.

“Any good or outstanding providers with an EFA contract will also be able to deliver traineeships, with the costs covered by current funding as we expect traineeships to replace other level one and two programmes.

“Where they recruit additional students, providers under a contract will be funded, while any grant-funded providers will receive an increased allocation next year.”

A spokesperson for the Association of Employment and Learning Providers said: “We welcome this money, but we’ll need more. Further funding will also be required if the programme is expanded from 19 to 24.”

An SFA spokesperson said: “Providers of 16 to 18 apprenticeships that only hold a contract with us will receive a ring-fenced budget, alongside their funding allocations received for 2013/14, to deliver the traineeship offer.”