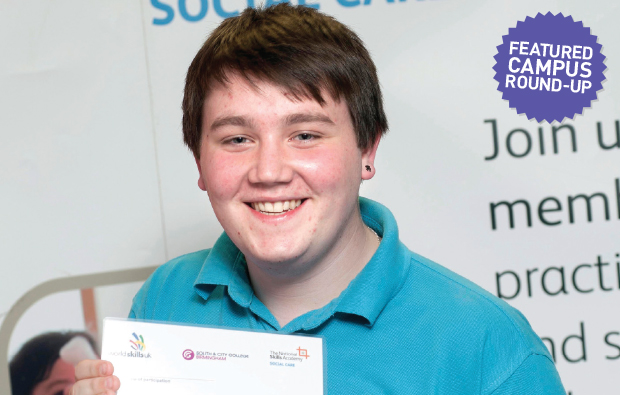 Thomas Bampfield wasn’t fazed when actors took the part of patients in a WorldSkills caring competition in the West Midlands, going on to win the regional heat.  Rebecca Cooney reports

A West Midlands student who wants to study paramedic science has won the regional heat of the WorldSkills UK 2013 caring competition.

Thomas Bampfield, 17, who is studying a level three diploma in health and social care at Walsall College and volunteers with St John Ambulance, wowed a panel of expert judges to clinch top place.

He said: “I always looked after my nan when I was younger.

“I’d go over and make her drinks and do the gardening for her; things that she couldn’t do.”

In the first round of the West Midlands heat, held at South and City College Birmingham, Thomas had to get an actor playing an elderly person with dementia out of bed, washed, dressed and ready for daycare.

“It was a strange experience, because they were very, very good actors,” he said.

“You wouldn’t have thought they’d be
able to perform the role as well as they did,
but it just felt like real life. I tried not to look
at the judges and acted as though the person was my nan.”

For the second round, Thomas was challenged with designing a week’s diet for a young adult with learning difficulties.

“I’ve got a student placement at a special needs school, so I deal with people with learning difficulties and disabilities regularly. I didn’t feel uncomfortable or out of place.

“I mentioned to one of the teaching assistants that I was doing the competition, and she sat me down and said ‘these are the different things you could come across’ — the staff really helped and that was all in their own time.

“In the future I’d like to finish my course and hopefully go to university to do paramedic science. It’s something that I’ve always been interested in — being in St John Ambulance is a big hobby. I think going into that profession would really suit me.”

Regional heats will continue until July, with the highest scorers going forward to the national finals at the Birmingham NEC this November.

The world finals will be held in Brazil next year.

Walsall College’s health and social care curriculum manager Surjit Jakhu said: “This competition gave Tom the opportunity to showcase his range of skills . . . and he did an excellent job, earning a very high score.

“He is a great role model to other male students looking to study health and social care.

“We are confident he’ll progress to the national final and believe he has a very good chance of going to Brazil.”

Presenting the awards, lead judge Jennifer Bernard said: “WorldSkills just gets better and better as a competition and a showcase for how well social care is carried out.

“It was a pleasure to observe such committed competitors taking part in this heat and to award prizes to some outstanding care workers and students.”