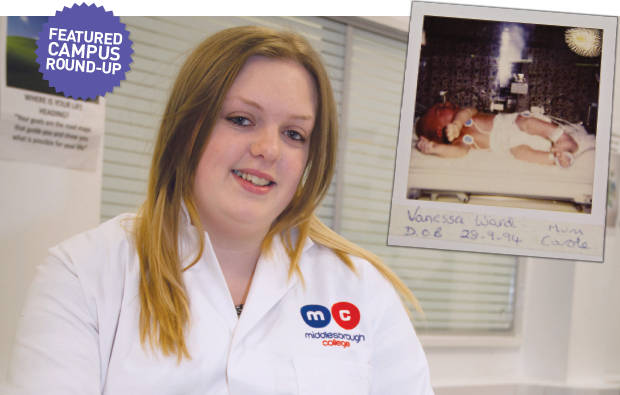 A Middlesbrough College student who was saved by the skills of midwives is set to become a midwife herself.

Level three BTec in healthcare student Vanessa Ward, 18, was one of 50 from around 1,000 applicants to be offered a place at Leeds University to study midwifery.

Vanessa, from Linthorpe, has wanted to be a midwife since she was 13, when her mother Carole told her about her own traumatic delivery; Vanessa was born blue and was whisked away to be resuscitated. She then suffered a fit that doctors were worried would cause brain damage.

“I was about three hours old before my mum actually got a chance to hold me — she didn’t even know if she’d had a boy or a girl,” said Vanessa.

“It was quite scary for my mum. She was very grateful to the midwives and she’s passed that on to me.”

Vanessa has worked hard to achieve her dream, completing a part-time ‘steps into healthcare’ apprenticeship alongside her GCSEs when she was still at school.

At college, she completed a range of placements including working with youngsters with disabilities, joining community nurses on their rounds and caring for the elderly in residential homes.

Vanessa, who also volunteers with the Teenage Cancer Trust and St John Ambulance, believes these placements and experiences helped her application to Leeds, but admits that she was still surprised when she got the news.

“I’d been unsuccessful at four other universities, so I was a bit apprehensive. It took me quite a while to open the UCAS application,” she said.

“I actually did a little jump for joy when I read it because I was on my own. Then I rang my mum and she was screaming down the phone.

She thinks that the favourite part of midwifery will be parents’ reactions when their child is born. “They’ll have been waiting for it for nine months and then they’ll have the relief and joy of that moment,” said Vanessa.

Her personal tutor at the college, Laura Birch, described Vanessa as a “very ambitious student” who was on target to achieve three distinction stars when she completes her course this year.

Vanessa said: “I can’t thank the tutors at Middlesbrough College enough for their help and support. I’ve worked hard for this and it’s thanks to the quality of the course and the great placements I’ve had that have allowed me to follow my dreams.”