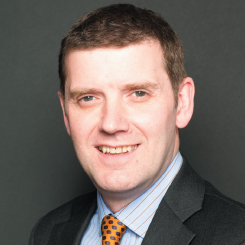 After an hour with Chris Jones it’s difficult to say I’ve discovered much that wasn’t already known.

What the City & Guilds chief executive did give away was an enjoyment of mowing the lawn at the home he shares with wife Judy in the Oxfordshire village of Bampton. Oh, and he enjoys watching a bit of sport.

The question remains as to whether the 47-year-old has simply risen up through a number of positions to lead a global organisation while spending his free time walking his two retrievers, Bailey and Murphy.

But he’s not being economical with the facts — he’s just not into detail it seems.

“I’m not someone who over-intellectualises things,” he says.

“I get up every day as if it was a new start. I come to work with as much enthusiasm today as I did when I first came to City & Guilds. I think I’ve been the same throughout my whole career.”

But I do discover that although he sits at the top table of one of the world’s largest awarding bodies, he’s twice dropped out of completing his own qualifications.

The father-of-two, who grew up in a farming family in Alton, Hampshire, had already dropped out of an HND in agricultural marketing and admin before starting a communications, advertising and marketing foundation course in London when he was 20.

But travelling home on the tube one day, he spotted a job advert for a sales executive at the farming titles of publisher Morgan Grampian and thought “I can do that”.

“I probably oversold myself in the interview,” he says, “but I dropped my exams, got the job and haven’t looked back since. Work presented me more interesting challenges than yet another exam.

“Life is quite simple for me. I wanted to go out and prove I could do well in the world of work — it’s why I dropped out of college.”

The business leader’s no-nonsense and impulsive approach has directed his pathway throughout his career. He remembers when, in his late thirties and by this point working as European managing director for global publishing business Lexus Nexus [incorporated from Reed Elsevier], he was offered a job, mid-flight to Ohio.

“The chief executive waited for the plane to take off and said they wanted me as their US product development head … and that they needed to know by the time the plane landed,” says Jones.

“It was a big deal because I had to think of my wife and two children. We’d all have to move to the States.”

But the businessman, who rose up the sales ranks at companies such as Midas Direct, Reed Business Publishing and Financial Times Electronic Publishing, seized the opportunity.

“I went for it,” he says. “It was a huge jump — the business in Europe was a £35m business with a couple of hundred staff, but when I moved to the States I had a budget responsibility of $100m and 1,000 staff.”

The four-year experience across the pond taught him not to “knock people down” if they’d succeeded, he says.

“I think sometimes in this country we’re too quick to do that. What we sensed most when we looked back at the UK was that it was inward looking, critical of itself, and people of each other. Hard work and dedication should be applauded and I think opportunities are there for everyone,” adds Jones.

“Being a good manager is about achieving with, and through, people — it’s about creating an environment where they feel they can succeed.”

“People need to feel challenged and rewarded, and that they’re going to be supported in trying to do new and different things.”

Jones worked in the States for two years “bringing the voice of the customer” to product designers at Lexus before asking to go back to running the business side of things, which he did for another two years, dealing with identity and credit authentication.

The educational part has been the most rewarding part of my career to date. It’s rewarding because of the opportunities you get to help people”

“Our business was in law enforcement and counter terrorism, using data to determine if people were who they said they were, for fraud purposes,” he says.

“We were there through the 9/11 attacks and worked trying to help the government understand people’s movements, which was fascinating.”

But in 2004, he and Judy decided to return home to be with their parents and to ensure that their children could start their secondary education in the UK.

It was at this point Jones took his first job in education, as chief executive of Harcourt Education, part of school textbook publisher, Heinemann. After a few years the company was broken up and Jones left, joining City & Guilds in 2008.

He says the firm was “very specific” that it wanted someone with a strong commercial background, but that he spends a lot of time talking to learners and visiting customers internationally.

“The educational part has been the most rewarding part of my career to date. It’s rewarding because of the opportunities you get to help people — whatever we do has a common thread, skilling people or skilling the workforce,” he says.

“There’s a space for the forward-looking FE colleges to fill the space left by polytechnics; to be incredibly employer responsive with vocationally-driven programmes for learning that support progression, and deliver to the workplace highly skilled and talented individuals.”

“I can see lots of opportunities to harness technology to support learning, whether that’s using technology better to lower the overall cost of delivery, or to provide new ways to inspire learners to achieve more.”

Vocational Moocs — massive online open courses — could be a part of that, he says, but they must deliver the high quality learning experience that industry will want from students.

Looking forward, he says that he’s interested to see what Nigel Whitehead’s review into adult vocational qualifications in England will unveil in September. The BAE Systems group managing director and member of the  UK Commission for Employment and Skills, was asked to investigate by Skills Minister Matthew Hancock. He began work on his report in March.

“I would want to see that happen more. I think that’s one of the reasons university technical colleges, and career colleges, will succeed.

“We have to get employers more actively engaged in shaping and driving the curriculum — there’s no point in an employer moaning about the output of the system if they’re not prepared to shape what the curriculum should look like. We need to look hard at what would give employers incentives to create work placements, work experience or new jobs for young people.”

As the media has made much of parents’ negative perception of the vocational route, still preferring to push their offspring towards university, does he think an apprenticeship would be good enough for his own children? He says he hasn’t driven his children in one direction or the other.

“My daughter Becky is very bright and did exceptionally well in GCSEs and would have been a classic four A-level student but she did a BTec in equine studies. Then she went on to do a degree in bio-veterinary science and she’s decided that she wants to be a veterinary surgeon.

“The important thing for me was supporting them in the decisions they made,” he says.

Spend time with my wife, my kids and my dogs