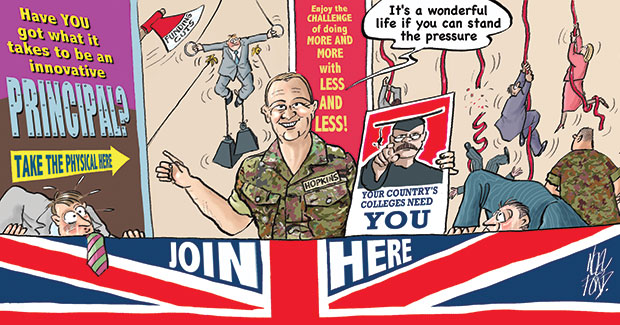 Succession planning is a key leadership challenge with too few would-be college principals waiting in the wings, a new report has warned.

The report, based on consultation with 130 principals at nine events in England this year and given to FE Week ahead of going live last week, said: “Succession planning and the need to encourage and develop the next generation of principals was raised at a majority of these events.

“Many colleagues identified concerns regarding a lack of new talent coming through as a challenge and felt something should be done to encourage more vice-principals and deputies to aspire to become principals.”

Mike Hopkins, council chair and Middlesbrough College principal, said: “I have worked in and with the sector for some 32 years. When I began, typically a post would attract at least 50 candidates.

“It is tough, but it’s perhaps, in part that toughness, which makes the job such a delight and challenge.”

Nick Lewis, the council’s general secretary and a former principal of 19 years at colleges in Nottingham, said a reduction in a principal’s independence had helped to make the role less attractive, but the government’s New Challenges, New Chances strategy — which prompted the research — would “reverse” the trend.

“The Coalition created New Challenges, New Chances, introduced new flexibilities and freedoms to colleges and has done a lot of work getting governors to recognise what they could be doing with those freedoms,” said Mr Lewis.

“Our piece of work is complementary to that — to try to get principals to think more laterally and creatively in this new context.

“From our point of view — from a principal’s point of view — what we see is that the Coalition’s strategy is reversing a decade in which our colleges have been drowned in bureaucracy and central government direction. Principals were not only told what to do but also how to do it.”

Their role — and the role of governors — had diminished in the past 10 years, he said. “We were directed by the government and its funding agencies,” said Mr Lewis.

“The biggest challenge for principals is that they’re being asked to become more innovative, creative and flexible, but that opportunity sits alongside fairly severe austerity.

“The demands of the day job to keep your college successful when you’ve got huge budget cuts and, at the same time, rise to the challenge of innovation is an awful lot of pressure on college principals.”

The council’s final report is due out in September after three further consultation events, the first of which was due to take place Monday, June 3, at London’s Kingsway Hall Hotel.

The second event is expected on July 1 and 2 at the Mottram Hotel, South Manchester, and the third on July 11 and 12 at Stratford-Upon-Avon’s Arden Hotel. Places are limited. Visit www.ascl.org.uk/ppc for more details and to read the interim report under the Challenges for the Future section.

For more on Mr Hopkins’s view on the challenges in attracting new principals, see his expert article.