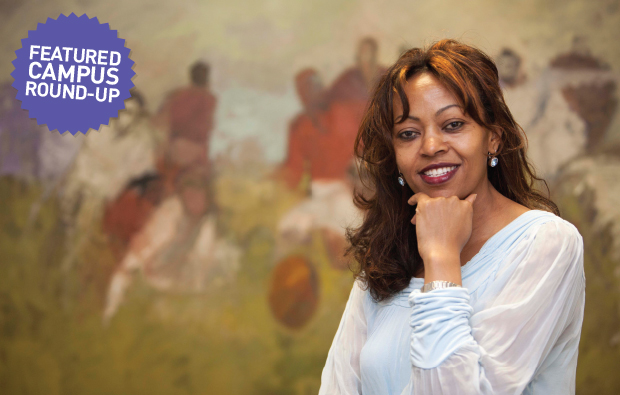 A mum-of-two who fled political unrest in Eritrea and studied English to try to fulfil her lifelong ambition to become a nurse has earned the Building Life Skills Through ESOL prize as part of Adult Learners’ Week.

Aster Ghebreyesus (pictured), 40, came to the UK in 1998 determined to become a nurse. But her English wasn’t good enough and she found work as a bus driver.

But after a health scare forced her to rethink her future, she seized the opportunity to pursue her dream and enrolled on a course at London’s Morley College.

“When I had my daughter I discovered that I had a heart problem and that sooner or later I would have to have an operation and wouldn’t be able to do my bus driving job afterwards. I had to do something to secure a job after my operation and that’s why I started studying ESOL,” she said.

“It’s made a big difference to me — it’s a totally different experience when you’re learning rather than just speaking to other people.

“You get experience from the people in the class as well, because everyone is learning from each other.”

Aster left Eritrea in 1991 and was separated from most of her family when the country gained independence from Ethiopia.

“My dad had campaigned for Eritrea and Ethiopia to stay united so they arrested him on independence day and we couldn’t stay any more,” she said.

Initially she went to Ethiopia, but when border tensions between the two countries flared in 1998, the Ethiopian authorities attempted to deport her and, unable to return to Eritrea, she moved to Kenya and then to the UK. She now lives in Lewisham, south London.

She said: “Since I was a child I wanted to be a nurse but my father halted my ambitions.

“So when I came here I was determined to do it, but I found it hard without English. Now that I have my children I decided this was the right time.”

“I felt so happy when I found out I’d been accepted… I’m really enjoying my course,” she said. “I still find working on my writing skills challenging, but the ESOL and introductory courses have definitely helped and I feel that I’m making good progress.”

“She is a dedicated, hard-working student and a great inspiration to others.

“Her achievements and passion for learning make her popular among her tutors and fellow students, and have inspired her family and friends.”

Aster will collect her award at a ceremony on Thursday.

She said: “Studying has been really helpful to me and I’m very glad I’ve won this award, I’m excited.

“At last things are looking up for me and I can see myself and my children having a better future.”