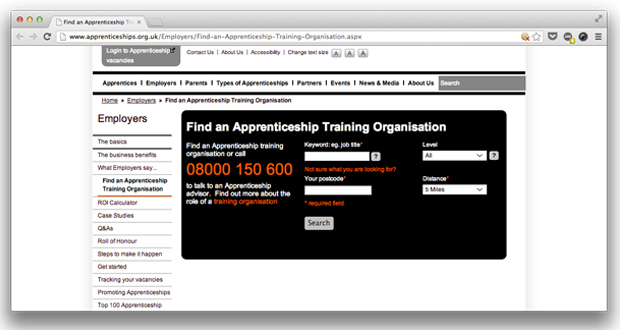 A newly-launched apprenticeship website aimed at employers could be leaving out national providers, it has been claimed.

A mandatory postcode section, combined with a mandatory distance field, means that providers without a base in the search area won’t show up in the results.

The Association of Employment and Learning Provider’s director of employment and skills, Paul Warner, said the promotion of providers was a concern.

“It is only fair that this issue should be rectified quickly,” he said.

It also returns their success rates in individual apprenticeship frameworks, such as construction building — woodmachining, and compares the rates with the national average.

It was designed in response to a review of apprenticeships for small and medium-sized enterprises.

Among the recommendations of the review, carried out by jeweller Jason Holt and published last May, was for the NAS to do more to put businesses in touch with suitable providers.

A new code of conduct for dealing with queries about providers subsequently came out. The Service Standard set out how NAS handles calls from employers.

It was launched along with a nationwide radio advertising campaign promoting apprenticeships and news that the government was extending the £1,500 Apprenticeship Grant for Employers of 16 to 24-year-olds (AGE 16-24) to March next year.

But it sparked concerns in January that subjective official advice could be dished out because just the single “most appropriate college or training provider” would be put forward.

Paul Eeles, chief executive at EMFEC (formerly East Midlands Further Education Council) said: “It is important the criteria used are only based on evidence of college and provider performance, rather than subjective views and third-hand understanding of provision.

“It may be beneficial for NAS to publish these criteria.”

However, a NAS spokesperson later said that “if more than one provider meets their [employer] criteria we will mention this, but most often employers ask us for one name”.

“If more than one provider meets their criteria we will mention this, but most often employers ask us for one name,” he said.

“To get to the fewest providers we will ask the employer to tell us what is most important to them, which might be for example where the provider’s physical premises are or what its success rates are.

“No information will be withheld from the employer — we’re facilitating the employer to make an informed choice.”

“Progress has been made since the NAS originally floated its proposals in the sense that the employer can now be presented with more than one choice of provider and FE Choices is being used to help inform the choice,” he said.

“However, it does appear that AELP’s concern that all local centres of a national training provider should be covered by the service has not been resolved yet and it is only fair that this issue should be rectified quickly.”