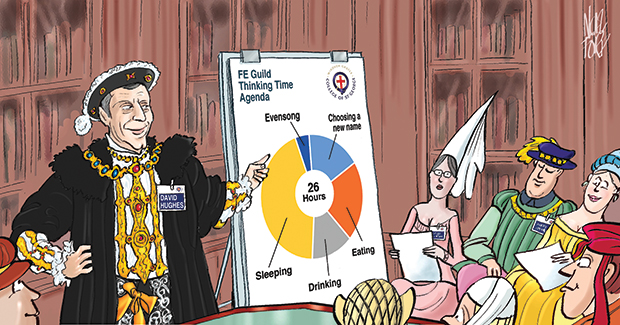 Twenty-nine “key people” from FE have been invited to eat, drink, sleep and “think” in secret at Windsor Castle about the sector’s new professional body.

A spokesperson for the proposed FE Guild — which will set professional standards across the sector — said it had hired St George’s House, a retreat within the castle, for 26 hours from May 13 to allow delegates to “commit their time to confidential thinking” and to  “help drive forward” the body due to launch in August.

She said the delegates — including Skills Minister Matthew Hancock — had been asked along to ensure the guild was committed to being “sector-owned and led” and “fully fit for purpose”. But while the guild confirmed 27 delegates would attend, a spokesperson for the Department for Business, Innovation and Skills (BIS) said the meeting was “not in the ministers diary”.

The new body — yet to be officially named — would foot the £8,265 bill, equal to £285 per person, to include lunch, a three-course dinner, drinks and accommodation, the guild spokesperson said.

It represents fair value for delegates who we are asking to commit to 26 hours of their time to complex, in-depth and detailed confidential thinking on behalf of the sector.”

But one FE leader, who did not wish to be named, told FE Week: “I question the wisdom of spending money on high profile external venues when funding is so tight, redundancies are rife and any number of boardrooms could have been used at little cost.”

The guild spokesperson defended the move saying: “While this is, of course, more than we spend on routine events, it is appropriate for a strategic sector-wide meeting that will shape the guild over the next decade and represents fair value for delegates who we are asking to commit to 26 hours of their time to complex, in-depth and detailed confidential thinking on behalf of the sector.”

Over the two days, delegates would consider the body’s priorities, and strategic and operational relationships with employers, and would agree on what was meant by “collective leadership”.  Represented bodies would be invited to commit to the new organisation.

The spokesperson added: “The venue was chosen because of its values of openness, honesty, trust and respect.

“People from all areas of society, holding diverse views, opinions and beliefs attend St George’s to debate freely. It is important to all of us in the learning and skills sector that this is the spirit in which we, too, can shape our own future at this strategically crucial time.”

Described on its website as a “safe haven, an environment receptive to new ideas, to taking risks, to living at the intellectual edge,” the venue also gives delegates the chance to pray three times over their stay.

In a leaflet advertising the venue it says: “The offering of prayer in the chapel finds a practical expression in consultations, where the house offers space for nurturing wisdom.”

FE Week reported last month that BIS had confirmed funding, excluding VAT, of £18.8m for August to April next year and the same figure again for 2014-15 to develop the guild.

David Hughes, independent chair of the guild’s development steering group and chief executive of the National Institute of Adult Continuing Education, said at that time the group would now be able to recruit a chief executive before its launch.