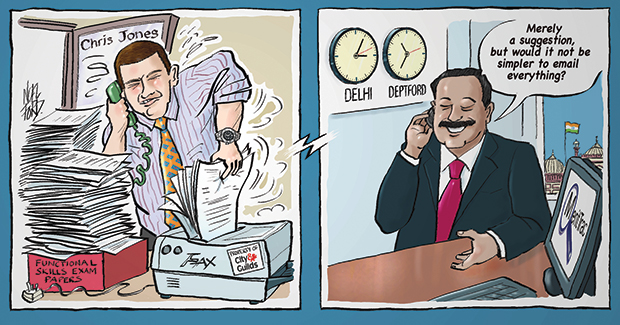 A leading FE awarding body’s decision to send exam papers to India to be marked could hit standards, Unison’s head of colleges has warned.

“It is sad if this initiative is about using cheap labour, at the risk of compromising standards,” she said.

She further questioned whether, at a time of high unemployment, there was “another solution” and if the problem stemmed from a lack of markers in the UK.

However, Chris Jones, chief executive of City & Guilds, defended the move, saying it wasn’t a “money-saving exercise”, but about meeting the “quick turnaround” that functional skills demanded.

“This is about reliability and integrity of the service,” he said, adding however that City & Guilds had invested a “substantial” amount in India and hoped for “cost-savings” it could “pass on to its customers”.

He said the firm currently charged around £13.50 per assessment, which covered commissioning test authors through to printing, loading, distributing and marking, quality assurance and integrity of results and certification.

It is understood to be the first time FE papers have been marked abroad and two other large awarding organisations told FE Week they had no plans to follow suit.

Exams watchdog Ofqual said the move hadn’t breached any rules, but said it was monitoring the situation.

“Our focus is on the quality of the marking, not the location where it takes place,” said a spokesperson.

She added: “But we will be keeping an eye on things to make sure.”

Meanwhile, a spokesperson for the Association of School and College Leaders said the move presented “yet more evidence” that the testing system was “overloaded”.

City & Guilds’ exam papers will be sent to MeriTrac, which claims to be the largest testing and assessment company in India.

The papers would only be for tests with a “low level of subjectivity and…a very clearly defined marking scheme,” Mr Jones told FE Week. They represented around 2.8 per cent of City & Guilds’ total number of exam papers, he added.

An 18-month pilot showed the company had “a far higher level of integrity in terms of marker pool, and the same levels of reliability in terms of marking and quality assurance, than we would naturally be able to achieve in the UK”, said Mr Jones.

Learners sat functional skills papers all-year round, he said, which resulted in high volumes of marking at times such as Easter when contracted markers in the UK — teachers and retired teachers — were often unavailable.

“The Ministry of Defence can’t send anyone to Afghanistan unless they have their functional skills; we have to be able to turn these results round in a couple of days,” said Mr Jones.

Around 220 Indian teachers now acted as markers, all of them trained by City & Guilds’ chief examiners over two weeks in the Asian sub-continent, he said.

Mr Jones added the company had retained 75 of its 167 contracted UK assessors for functional skills and was looking at other work opportunities for those who might lose out on contracted work.