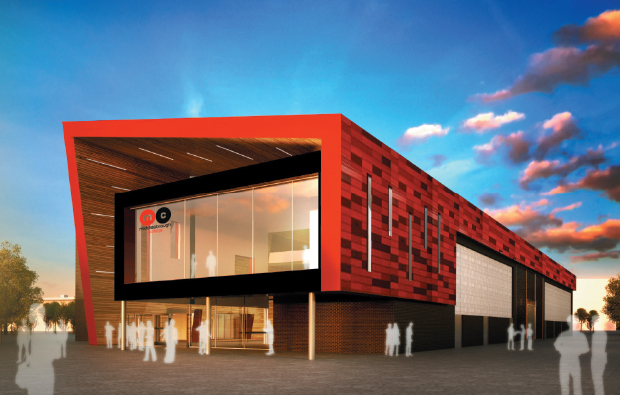 A ‘courageous’ Teeside college is braving economic storms to recruit more staff and invest heavily in new buildings. Eleanor Radford finds out why

But Mike Hopkins, principal at Middlesbrough College, is “clear” student numbers will continue to grow.

Mr Hopkins is overseeing a heavy investment in science, technology, engineering and maths (STEM subjects) over the next three years by erecting new buildings and extending a sixth-form centre that opened last year.

He said the college wanted to help “combat national skills shortages”, and was now advertising for lecturers in specialities from computing and health care to engineering and A-level subjects across the board — an investment of around £1m.

“At the moment we’re in a virtuous cycle,” he told FE Week.

How had the college achieved this when other providers were struggling, with redundancies becoming common?

“When I arrived in 2010 the college had £7m in reserves and the board very courageously decided to spend it when others might have thought ‘let’s ride out this storm of austerity’,” said Mr Hopkins.

“Our A-level centre is already very busy and unless we start building this summer we won’t be able to accommodate what we anticipate will be growth next year — we’re getting particularly buoyant applications in STEM subjects.”

Middlesbrough College had applied for a £6.5m capital grant from the Skills Funding Agency, and aimed to plough a further £13.5m of borrowed money into what Mr Hopkins described as the “ambitious but necessary” expansion.

The board is taking a risk, but we want to deliver high quality now”

This would allow the college to enrol a further 450 A-level students, said Mr Hopkins.

The bulk of the cash would then be invested in 2015 when the college hoped to build a £12m STEM centre for training in advanced manufacturing, process, engineering disciplines, digital, warehousing and logistics.

“The board is taking a risk, but we want to deliver high quality now and we don’t want to be scrambling around in September for part-timers.”

He said the college was being “brave” but was determined to do the “best” it could for a community in the eighth poorest town in the country.

He said: “If these numbers of students don’t come in I will be at best embarrassed.”

However, he added: “I’m really clear they will come in. While we have wonderful facilities, no one has ever been cared for, cooked for or cleaned by a brick. It’s people that make the difference. I’ve got wonderful colleagues who make my job very easy.”