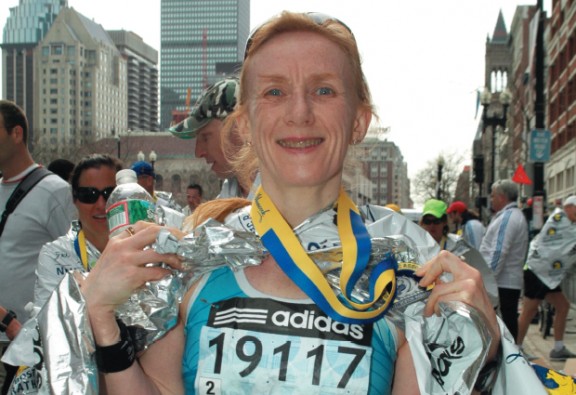 As Elaine Battson collected her bag after a successful Boston Marathon, she thought the explosions she heard were fireworks to celebrate the end of the event.

But within minutes, the Institute for Learning’s director of finance discovered that the April 8 event had been bombed.

“I’d gone through the finishing line, got my medal and was waiting at a baggage place when I heard the noises. I turned around to see smoke coming from down the same road as me,” she told FE Week.

“I got chatting to a man who told me what had happened, that it was definitely a bomb. I felt freaked — it was just unbelievable.”

As the story of the co-ordinated blasts that claimed the lives of three and seriously injured more than 100 was relayed across the globe, the 47-year-old  avid runner who has completed 74 marathons in a decade, made her way back to her hotel.

Initially she hadn’t noticed that anything was different.

However, it soon became obvious that people were looking “more worried than they should be”.

“There were suddenly lots of police and army around. They were shutting shops and everything was closing — it was all anyone was talking about,” she said.

“The hotel staff just tied to look after us and keep us going.”

She didn’t feel scared — even though she was in the city on her own — but she did sleep fully clothed and with a packed suitcase next to her bed in case she was forced to evacuate in the middle of the night.

“People back home were more worried than I was — around 20 got in touch to check I was OK,” said Ms Battson, a member of Hackney’s Victoria Park Harriers running club who has completed 24 marathons in the past year.

She flew home the next day having spent the rest of her time in Boston in her hotel room watching the news. But she will return.

“It’s such a great place to visit. I’m determined to return to show some support for the city,” she said.

And the incident hasn’t deterred her from her aim of completing 100 marathons, with this month’s London marathon the most recent under her belt.

She said: “London was very special — lots of people were showing their support for those in Boston. They were wearing black ribbons and t-shirts saying: ‘For Boston’.”

Brothers Dzhokhar Tsarnaev, 19, and Tamerlan Tsarnaev, 26, who originate from Chechnya, are believed to be responsible. The 19-year-old was captured after a huge manhunt in which his elder brother died.

Featured image caption: Elaine Battson, director of finance at IfL, at the Boston marathon finishing line just moments before the bombs went off