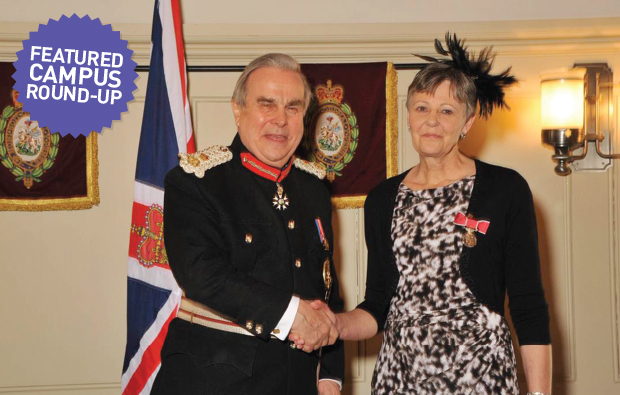 A college catering assistant honoured in the new year is now looking forward to a garden party at Buckingham Palace. She’s just hoping the sun will shine, writes Rebecca Cooney

A college catering assistant from Romford has received a British Empire Medal and has been invited to tea with the Queen.

Sandra Coats, 57, has worked at Barking and Dagenham College for six years and was mentioned in the Queen’s New Year honours list for her outstanding contribution to the college.

“It was a lovely feeling, I’m just so pleased to be recognised It’s nice to be appreciated sometimes when you work hard,” she said.

Sandra was presented with her medal by Sir David Brewer, Lord-Lieutenant of Greater London, at a special ceremony held at the Tower of London.

Her husband, daughter and her daughter’s partner went with her.

“It was such a special day. It is something I will never forget,” she added.

But there is still more excitement to come, as Sandra has also received an invitation to a garden party at Buckingham Palace in May.

“I can’t wait to go to the palace — the letter said the Queen and other members of the royal family would be there,” she said. “The weather will be a bit nicer as well.”

A letter arrived last November, telling Sandra she had been nominated for an honour, but that she wouldn’t know for certain until December.

“It said it was confidential and I wasn’t supposed to tell anyone,” she said, admitting she found that a bit of a challenge.

She had been nominated by the college principal, Cathy Walsh.

“When I eventually told Cathy about the medal, she said she was so pleased,” said Sandra. “She told me that she’d nominated me because I deserved it.”

A college spokesperson, Anne Vessey said: “We are so proud of Sandra. The dedication and care she shows to all our students at Barking and Dagenham is very special. Her honour is our honour.”

Sandra serves breakfast and lunch, as well as cater for special events.

“I do really long hours, so I think it is well deserved,” she said. “It’s so nice for Cathy to notice and appreciate me though.”

She might admit to long days but said that she loved her job.

Her colleagues were all “very pleased” for her, she said. She planned to take in her medal to show it to them and to students.

She said she will hold on to and treasure her memories of the year.

“I’ve kept everything, all the letters that have come through right from November from the lieutenant and everything, I’ve got it all in a folder,” said Sandra.

“I feel really special at the moment and don’t want the fairytale to end.”