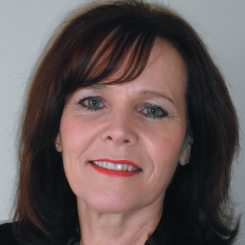 It’s the mid-1970s. You’re a pupil in Northern Ireland, at the height of the Troubles, nervous about the careers advice you’re about to receive. You’re told there simply are no jobs . . . anywhere.

“There was high unemployment and, I don’t think I’m exaggerating, Northern Ireland was like a war zone,” says Deirdre Hughes, a former careers adviser who now chairs the National Careers Council.

“I think that’s at the core of my interest in how people get jobs when sometimes there apparently are none.”

Hughes’s interest in careers has resulted in a working life that has included setting up the University of Derby’s International Centre for Guidance Studies (iCeGS), being a lead consultant with the European Lifelong Guidance Policy Network, and membership of the UK Commission for Employment and Skills (UKCES).

The impressive list, which is far from exhaustive, betrays a steely focus that could have been born of experiences growing up as a Catholic in the coastal town of Coleraine.

“I got searched on the way to and sometimes on the way home from school, and if I went into shops there was always a bag or a body search,” says the mum-of-two.

“I grew up in a town where there wasn’t a lot of violence compared with the bigger town and cities, but I was in a minority living in an area where there was a lot of awareness of people’s religion.”

She adds: “Once, I missed the bus with my sister going to school. There were two buses — the Catholic one and the Protestant one.

“We missed ours, so we got on the other one because it was raining. We were just children, being pragmatic.

“We got on the one we weren’t supposed to and the driver said: ‘Stay close — don’t go down the bus.’

“There were adults and children on it and this woman came up to us — we were only around 12 — and demanded the driver kick us out into the cold and rain.

“He protected us and said: ‘Leave the children alone’.

“Sadly, the woman who was the perpetrator lost her son. He was blown up planting explosives in people’s gardens. I felt sorry for her and her family to think that they lived their lives ruled by dogma.

“I never came to any harm, but I saw what injustice is like. Maybe that’s where I get my steely sense of right and wrong from.”

At 20, she left her three sisters and younger brother behind as she moved to Bristol having met and married husband Robert, who worked for Rolls-Royce.

She got a job with social services, “and then by sheer chance saw a job called an unemployment employment adviser”.

The post involved approaching employers in the hope of persuading them to take on some of Bristol’s “hardest to help young people”.

“That whetted my appetite and I began to wonder if they had careers systems in other places, so, at 25,  I decided I needed to get myself educated,” explains Hughes, 52.

I got searched on the way to and sometimes on the way home from school, and if I went into shops there was always a bag or a body search”

She adds: “You’ve got to be curious about different frameworks and systems. There’s no single person that’s got the right single answer by looking just in their own back garden.

“It’s always helpful to look in other countries to see how they’re doing — not least for reassurance that the things you’re struggling with really are difficult because other places struggle with them, too.

“But there are also dangers in thinking that we can look at another country and adopt their methodology.

“Every country should have sense that it’s got to develop its own framework.”

So, appetite whetted, Hughes took on a postgraduate diploma in career guidance at the University of the West of England.

“I had to do an exam first. It was intimidating as lots of people had degrees whereas I just had work experience,” she says.

“A voice in my head was saying: ‘All these people are cleverer than I am’ but then someone said: ‘How do you spell professional?’

“I knew I could spell it — that was a critical moment for me that made me think I could be there, and deserved to be there.”

Around a year after she completed the diploma, in 1987, and with children Gemma (now 27), and Patrick (now 24), to care for, Robert’s career took the family to Derbyshire, where they still live.

There, she taught at the Nottingham Trent University — training careers advisers and working with teachers on careers education — while completing an Open University masters in education and employment.

“I thought I’d found my ideal career at Nottingham Trent and then a job came up at the University of Derby.  Thinking pragmatically, it was easier than travelling to Nottingham,” says Hughes, whose job at Derby entailed setting up the iCeGS.

She adds: “I started there with a budget of £25,000 — £5,000 each from five careers companies and the university gave us premises.

“It was my job to make the centre viable. I did that for ten years and ticked all the boxes — developed a masters programme, distance learning and got the centre established with international experts, was able to demonstrate that we were the largest income-generating research unit at the university.

“But at the ten-year point I asked myself if that was everything I wanted to be remembered for.”

She left in 2008 having got a PhD through publications on careers work and set up DMH Associates as a sole trading researcher.

“Careers guidance is very easy for people to dismiss — it doesn’t sit in education or employment,” says Hughes.

“It’s important for the ones who haven’t got the networks or the contacts — Daddy can’t organise work experience for them. That’s what drives me.”

Royal recognition came for that drive in January last year when she was awarded an OBE for services to careers.

“On the day at the palace the Queen was giving the awards,” explains Hughes.

“I spoke to her about careers work — ‘Isn’t that about helping people find jobs?’ she said. ‘Yes, Ma’am’.”

The Color Purple by Alice Walker

I’d like to be able to fly. If you got bored, just being able to fly away and come back feeling refreshed and energised, possibly even take people with you, would be great