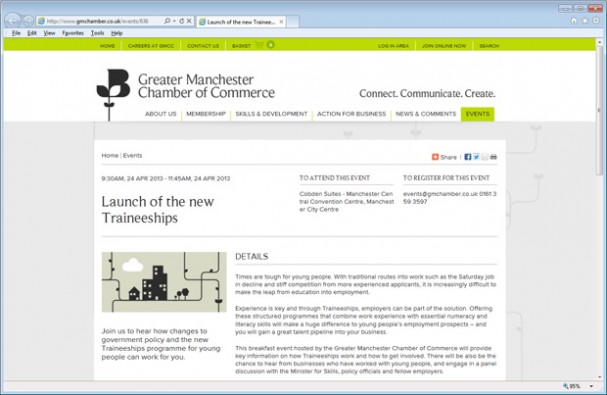 The 11-month wait for an outline of the government’s plans for traineeships appears to be almost over, just as youth unemployment figures nudge the one million mark.

Skills Minister Matthew Hancock is due to speak this week at an event hosted by the Greater Manchester Chamber of Commerce to provide “key information on how traineeships work and how to get involved”, according to the business organisation’s website.

The event, billed as the launch of traineeships (pictured), has been pencilled in for Wednesday, April 24 — although a spokesperson for the Department of Business, Innovation and Skills (BIS) said the date had not been confirmed.

“We’re looking to launch the traineeships programme shortly but we don’t have a date confirmed yet,” she said.

Traineeships, proposed by the Deputy Prime Minister Nick Clegg in June to help young people gain work-related skills and attitudes, are due to start next academic year.

Pressure for the government to clarify how the scheme will look is mounting after it emerged that 979,000 16 to 24-year-olds were out of work in the three months from December to February.

The youth unemployment figures, released by the Office for National Statistics, showed a 20,000 increase on the three months from September to November.

There is a need to see the plans for traineeships as soon as possible so the sector can properly gear up.”

Julian Gravatt, assistant chief executive of the Association of Colleges, said it was “taking time” for the government to finalise the traineeships proposal, including the role that Ofsted ratings would play in deciding who could offer traineeships.

“Public spending cuts mean that colleges will have smaller budgets in 2013-14 than this year,” he said.

“But priorities are clear and we’re currently working with ministers and officials in all three departments — Education, BIS, and Work and Pensions — on ways to make the money available go further.”

However, Paul Warner, director of employment and skills at the Association of Employment and Learning Providers, said the unemployment figures “underlined” the need for a traineeship programme.

“As business planning by providers is well underway for the forthcoming year, there is a need to see the plans for traineeships as soon as possible so the sector can properly gear up to meet the challenges they will present,” he added.

Recent discussions with both the Skills Funding Agency and Education Funding Agency indicated that they were confident about the sector meeting the demand for high-quality programmes “providing funding is available to the right organisations at the right time”, said Mr Warner.

Traineeships for 16 to 24-year-olds were first mooted by Mr Clegg at a Confederation of British Industry summit on youth unemployment.

They were then put firmly on the FE agenda by Skills Minister Matthew Hancock in January when he revealed plans in a discussion paper.

He outlined aspirations for the traineeship model — to be made up of work placements and work skills training, with focus on English and maths for those who did not achieve a C at GCSE — to support young people into apprenticeships and other employment opportunities.

He also put questions out to the sector to canvass views, closing the consultation in February.

The BIS spokesperson said the department had an “overwhelmingly positive response” to the discussion paper.

She said: “On the basis of those responses, we have developed a framework for delivery for traineeships that we will publish shortly.

“This will provide employers, education and training providers and young people with practical information about how the new programme will work, and how they can get involved.”

Nick Clegg was the first member of the Coalition to refer to traineeships, saying in June 2012 that “more detail will be coming soon”.

In the same speech he pointed out youth unemployment stood at more than 1 million and rightly said this wasn’t “just an unforgivable economic waste — it’s a human tragedy too.”

Fast forward 42 weeks, and with this ‘human tragedy’ worsening, our Skills Minister is finally expected to launch traineeships within a matter of days, or at least explain what will or won’t be fundable from August.

Action to tackle youth unemployment, with positive intervention leading to sustainable work should be applauded.

But if traineeships are slow to take off, let’s not jump to blame providers.

Remember August is only 14 weeks from now, so they’ll have little time to plan.

And with 16 to 19 and adult skills budget allocations already with providers, will they be in a position to reallocate some of their already committed budgets?

Further, will young people know about this new opportunity?

A breakfast launch in Manchester is unlikely to hit home. I’m left hoping the Cabinet Office has agreed a national marketing campaign.