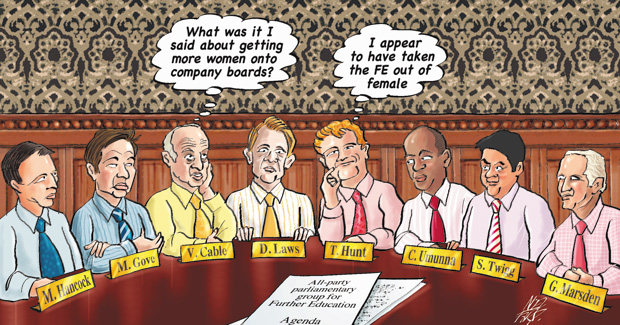 The lack of female politicians responsible for FE has been criticised following a mini-reshuffle.

The departure of Karen Buck, junior Shadow Minister for education, will leave no women in senior posts affecting the FE sector in either the Government or Opposition.

Ms Buck, who spoke at the Assocation of Colleges annual conference in November, is becoming parliamentary private secretary to Ed Miliband, will be replaced by Tristram Hunt, who will join Stephen Twigg, Chuka Ummuna and Gordon Marsden in the Shadow jobs for Business and Education, opposite the Coalition’s Michael Gove, David Laws, Vince Cable and Matthew Hancock.

Lynne Sedgmore, 157 Group executive director, said: “It is disappointing that the political leadership for our sector is 100 per cent male.

“The Government and the Opposition should model their rhetoric of the importance of women in senior positions.”

Association of School and College Leaders general secretary Brian Lightman said: “Like everyone, we would like to see more women in ministerial positions and I am sure all political parties are making every effort to ensure more women MPs take on roles of increasing responsibility.”

The comments come just a week after Business Secretary Vince Cable challenged businesses to increase the number of women on their boards.

He wrote to seven FTSE 100 companies with no female representation on their boards, warning that if companies did not increase diversity at the top level, the government would consider implementing quotas.

Only two FTSE 100 companies have female chief executives  and 22 per cent of MPs are women, while 41 per cent of FE college principals are women, according to the Association of Colleges.

Sally Dicketts, chair of the Women’s Leadership Network, said: “I think in this day and age it’s very unfortunate not to have a balanced group at the top level.

“There may be very talented men on both sides of the political divide commenting on and making decisions on FE, but staff and students in the sector are at least 50 per cent women. They do need to be represented.”

A spokesperson for the Association of Teachers and Lecturers said: “We need high profile women as role models and it’s a shame that neither the Government nor Opposition have seen fit to ensure there is a woman MP in any of the key FE posts.”

A spokesperson for University and College Union said: “It is… disheartening that none of the parties has any women in their main FE education teams.”

A party spokesperson said: “With Sharon Hodgson, Lisa Nandy, Bev Hughes, Maggie Jones and Bryony Worthington representing the Shadow education team in both the House of Commons and the House of Lords, coupled with Shabana Mahmood and Dianne Hayter in the Shadow Business, Innovation and Skills team, Labour has strong representation from women in the education and skills sector.”

No one from the Government was available for comment.