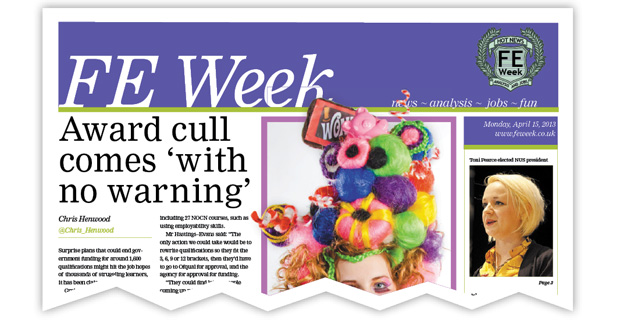 Plans to stop government funding for qualifications aimed at helping the unemployed have been shelved.

The Skills Funding Agency had said it would stop paying for around 1,600 ‘awards’, prompting criticism that struggling learners could be among the hardest hit.

“When we saw what the agency was planning to do, and it’s doing it quite quickly, we found that over a year this could affect up to 50,000 people,” he said.

“These are generally learners at the lower credit levels, where qualifications are very much for people who are in difficulties and trying to get into employment or further education — the unemployed, for instance.”

However, the agency this week said it had reviewed the move, which was revealed in its New Streamlined Funding System for Adult Skills document.

Qualifications with credit values of 1, 2, 4, 5, 7, 8, 10 and 11 under the Qualifications and Credit Framework would not have been funded from January.

But, following the U-turn, an agency spokesperson said: “We understand the value of small award-sized qualifications, however we are concerned about whether they are all of sufficient size to ensure meaningful learning and achievement and to support significant progression and job outcomes.”

She added: “We will review the position of small qualifications approved for public funding as part of our broader qualifications review work, taking into account the emerging outcomes of the Whitehead Review of Adult Vocational Qualifications.”

The move could have resulted in the end of public funding for, FE Week understands, more than 1,600 ‘awards’ — including 27 NOCN courses, such as using employability skills.

Mr Hasting-Evans said: “We welcome the decision by the agency as it will mean that the opportunities to develop their skills will remain open to some 50,000 disadvantaged learners.

“It is recognised that the funding of awards may need to be changed, but this needs to be in consultation, fully reflecting the likely impacts and to a realistic timescale.”

The move would have been the second cull on qualifications in as many months.

We are pleased the agency has shown flexibility on the funding of awards.”

The agency was warned in February by the Federation of Awarding Bodies that it risked “destabilising the system” with plans to stop paying out for nearly 2,500 qualifications that had little or no uptake.

The now-rejected latest cull drew further criticism from the federation.

Its chief executive, Jill Lanning, told FE Week: “We and our members had no prior warning and we have sought clarification from the agency about the rationale for the change.”

However, she welcomed the agency’s change of heart.

“However, we note the fact that the agency will be looking at the future funding of small qualifications and we look forward to having an active dialogue with them about the positive role played by award qualifications in the sector,” she said.

Judith Norrington, director of policy, research and regulation at City & Guilds, where 445 awards would have been affected, said: “We are pleased the agency has shown flexibility on the funding of awards, and is treating them the same as larger qualifications.

“Smaller qualifications are key to developing employers’ future workforces and, more importantly, they help the unemployed.”

Julian Gravatt, assistant chief executive at the Association of Colleges, said: “We’re pleased the agency took advice from the technical funding group and has allowed more time to review this change.”