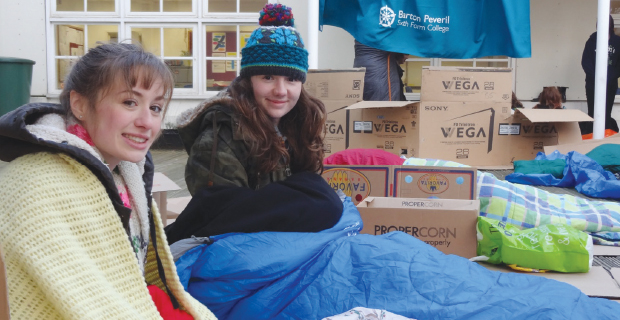 A sponsored sleep-out in a Hampshire college raised more than £1,000 for Crisis. the national charity for single homeless people.

Thirty students and four staff at Barton Peveril College spent the night on campus outside in sub-zero temperatures with only boxes, bags and blankets for shelter.

The event was organised by the student committee.

Committee president Harry Spicer said: “No one here can imagine doing this every day. We’re well aware that our experience was a very tame version of a harsh reality and that we were fuelled by the energy and adrenalin of it all.

“I think it’s given us all the ability to empathise more, but we still don’t really understand what it’s like to be homeless.”

After packing up their cardboard village, the hardy volunteers collected donations from staff and students to boost the £1,000 already raised through sponsorship.