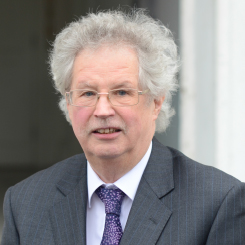 It’s not an easy job getting audiences to master complex financial concepts. And you don’t normally expect to cross wit with funding systems.

But as John Bolt hangs up his calculator and settles into retirement, the FE funding guru reflects on a career that he believes worked best laced with humour.

“They liked the jokes,” says the former teacher who made his name  developing software and speaking at conferences all over the UK and the US.

“I used humour because when you’re representing the government people are always going to take a pop at you — it happened only once to me.

“Out of the several hundred events I did, to only get that once was my real highlight.”

Bolt, 66, started his working life as a teacher, becoming an assistant director at the Learning Skills Council (predecessor to the Skills Funding Agency).

His last task before retirement was to advise the agency on its new FE funding system, due to go live later this year.

The Bristol-born chemistry graduate and Bristol Rovers fan admits that he “always wanted to be seen. I wanted to be out there, speaking at events.”

He adds: “If people read things in print they might look negatively at what it might mean, but in person you have the chance to discuss it and take on queries, listen to objections.

I like the fact that the sector appreciated it.”

After being invited to speak at conferences on behalf of the Association of Institutional Research, Bolt then held court from New Orleans to Chicago, Boston to Toronto — even Orlando, where he hosted gigs at lavish Disney World hotels.

“In America these were huge events over four days with up to 2,000 delegates,” he recalls.

“They liked the British — they could take the humour.”

The self-confessed workaholic has already tried to retire twice, but has always been persuaded to start something new, most recently consulting for accountancy giant KPMG, which kept him doing workshops for the Association of Colleges.

The association honoured him in 2008 with a lifetime achievement award for services to FE.

Bolt, now based in Coventry, says his eureka moment, which “made his career,” came when he was working as a senior IT lecturer at Coventry Technical College in the early 1980s.

Some found my funding formulas too difficult to deal with. They felt the population as a whole would be bamboozled — basically by GCSE maths”

“We were teaching managers of big firms how to use computers for planning and a new principal came along and changed my world,” he says.

“He wanted a new system for collecting data and told me to put my money where my mouth was.

“I was upset at first and didn’t know where to begin, but I came up with an idea and it made my career.”

Bolt’s creation — a system that collected figures from student registers — put him at the cutting edge of data use and he saw a revolution in the way information could be used.

His software saved the college £60,000 in its first year and went on to be sold to 60 colleges around the country.

“We set up a college company with 16 staff and an annual turnover of £1m,” says Bolt, (who in his youth shared a Cotham Grammar classroom with Graham Hoyle, chief executive of the Association of Employment and Learning Providers).

“The information exposed a series of things — good and bad — and the unions were touchy.

“Colleges are now funded based on data, but that came 20 years after.

“People complain data is too complicated to collect, but then as soon as they don’t have the information, they say they need it.”

Overcoming hurdles when it comes to maths is nothing new.

“When I first met civil servants the mood was they were all brilliant at English, but maths was something they did at school,” he says.

“They weren’t really interested in maths and were sometimes critical of approaches I would take…some found my funding formulas too difficult to deal with. They felt the population as a whole would be bamboozled — basically by GCSE maths.”

He adds: “I think as a nation we’re getting worse at maths.

Bolt’s software was seen as “the lead” and “praised by the EU”, but eventually the company was sold.

He then had what he describes a “stroke of luck” when, in 1993, FE colleges were incorporated and funded by the Further Education Funding Council (FEFC).

The body set up its head office just half a mile from where he was working as director of management information systems at City College Birmingham, an opportunity the number cruncher jumped at.

“I immediately made contact and became friends with the people who worked there,” he says. “I became part of their working groups, which meant you could influence what the council was going to do — you had inside knowledge. It was worth the time spent away from the college, which they accepted.”

The investment paid off and in 2000 Bolt’s “dream job” came up as technical lead on funding systems for the FEFC, soon to become the Learning Skills Council.

“I was very pleased to become part of such a strong team,” says Bolt, adding that the role allowed him to become the public face he’d “always wanted to be”.

“I spent eight years leading a team through various iterations of changes to the funding formula, met with ministers and together we worked towards simplification — a term I’ve always hated.

“We ran events that were often massively oversubscribed.

“We ran regional workshops, but they proved really expensive so we teamed up with the AoC. This meant we could charge, which the sector didn’t like.

“These workshops led to invitiation to tour the US.

He says he was about to leave the LSC six years ago, but was persuaded to stay on part-time. Approaching his second retirement, he was poached by KPMG.

“They have a strong education arm and encouraged the training events, still held through the AoC — so KPMG were charging the association for my time,” he says.

“Then about a year ago I was invited by the agency to help them as they were designing a new funding system, but through KPMG.”

As he apprehensively takes on retirement, he says he is looking forward to spending more time with wife Frances, their two sons and three grandchildren, as well as watching more cricket and reading books that are not about FE.

As he bows out after 40 years, what are his final thoughts on the sector?

“It is incredibly resilient with all the changes it constantly faces,” he reflects.

“They would say colleges have been here for 100 years or more and there have been numerous changes — but they’re still there.”

Grapes of Wrath by John Steinbeck

To score a century playing cricket for England

To live for a long time and retain my health