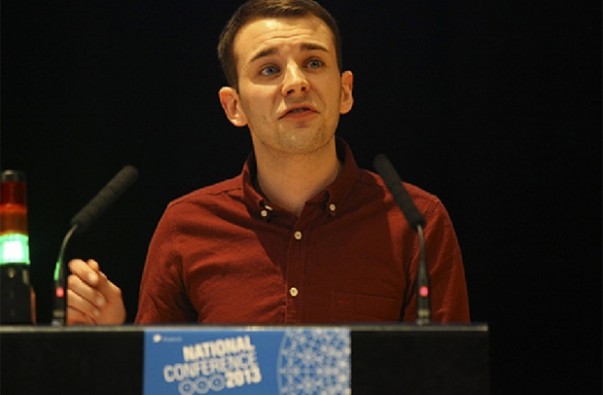 Joe Vinson has been elected as vice president for Further Education of the National Union of Students at their annual conference today.

Mr Vinson has been president of Cornwall College student’s union since 2011, and a member of the NUS LGBT (Lesbian, Gay, Bisexual and Transgender) committee since 2013.

In his election speech at the NUS conference, he said: “For me college wasn’t just about qualifications, it was a place I finally felt I could be myself. I’m not a typical FE student; none of you are, because there is no such thing.”

Mr Vinson has been an active member of the Labour party for many years and at 18 was elected unopposed to St Agnes parish council, making him the youngest councillor in Cornwall and possibly the country.

It’s without any doubt that Joe has the skills and the determination to continue the fight for FE students.”

During his time at Cornwall College, Mr Vinson spearheaded a successful campaign to see all students who would have been eligible for the EMA awarded free transport to college.

He made reference to this in his election speech, saying: “Local action can be so effective and it’s a central part of winning for students, calling everyone to London once a year for a demo is not enough, we need grass roots campaigns with strong links to their communities if we are going to begin to meet the challenges we face.”

His election speech set out his stance on EMA, which he described as “a flawed system.”

But he added: “What we have now isn’t good enough. No student should have to beg their institution for help… I will fight for a support system that leave no-one behind.”

Mr Vinson had the support of his predecessor in the role, both as vice president for FE and as president of the Cornwall College SU, newly elected NUS president Toni Pearce.

She said: “It’s without any doubt that Joe has the skills and the determination to continue the fight for FE students. He’s a strong campaigner with a proven track record, and his work not just at Cornwall College but with students’ union across the country has been outstanding. I know that he will ensure FE students’ unions are well supported.”