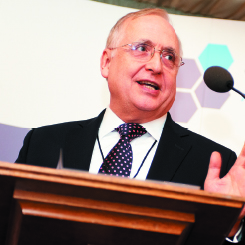 What did Incorporation do for sixth-form colleges? Well, says David Igoe, few principals and governing bodies would choose to go back to local authority control

In 1992, sixth-form colleges came under schools regulations and were funded and administered through the local authority. Incorporation in 1993 came, therefore, as both a surprise and a shock, not least to find ourselves thrust into the new world of FE, jostling and competing with much larger general FE colleges and their tertiary cousins.

We liked the sound of the freedom and autonomy that came with Incorporation, with new opportunities to expand into the adult market, the ability to borrow and control capital expenditure and manage our own estates. We were less keen on the 5 per cent annual efficiency requirement in the early years, coupled with convergence to the FE mean level of funding. This was harsh for many sixth-form colleges that did not have the economies of scale afforded to general FE and financial collapse reduced our number from 126 at Incorporation to 100 by 2000, with most lost to merger with larger, general FE colleges.

Despite the setbacks, most sixth-form colleges prospered and grew through the 1990s. Cutbacks did not affect quality; most colleges ‘resolved’ their financial position by increasing class size and rationalising senior management teams. Paradoxically, performance outcomes rose in inverse proportion to increases in class size that by 2000 were an average of 19 compared with 11 at Incorporation. The greatest change was in size of institution. The average sixth-form college had around 800 students in 1993; today it
has 1,650 and rising.

But sixth-form colleges have never felt entirely at home in the FE sector. This was recognised by Andrew Foster who singled us out in his influential 2005 report into the future of FE. He recommended we be recognised for outstanding quality and protected from further merger. This suggestion found some substance in the Apprenticeships, Skills, Children and Learning Act of 2009 that created a new ‘designated’ legal entity for sixth-form colleges. It also placed them under the stewardship of the Department for Education — unlike the rest of FE, which remained with the Department of Business, Innovation and Skills.

So what did Incorporation do for us? The 94 remaining sixth-form colleges have emerged as a strong, confident sector with an impressive track record of performance and operational management. We still have financial worries and have been hit hard in the current round of cuts and efficiency requirements; but we’ve been through this before.

Incorporation gives us the means to manage our own destiny, a prize we would not want to give up. Few sixth-form college principals and governing bodies would choose to go back to local authority control. We are the true pathfinders for a model of education based on self-managing, autonomous institutions that is now being promoted as the model for all progressive institutions — they happen to be called academies and free schools.