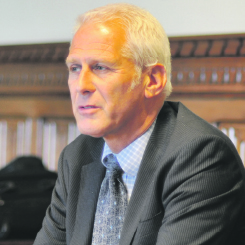 Picture the young Gordon Marsden on his first day as a tutor for the Open University. It is the early 1980s. He is standing in a hall in Tottenham, North London, and no one is taking much notice of him. He is 20 years younger than most of the others in the hall. What to do?

“I went to the front and heavily put my files on the desk and said: ‘I am Gordon Marsden and I am your course tutor’. We took it from there,” says the Shadow Skills Minister.

It may have been a shaky start, but it was the start of a long love affair between the now 59-year-old and the university.

So much so that he went on to tutor part-time in history for the next 20 years. But it wasn’t his first – or only – job. He’d already worked in public relations before editing History Today, as well as New Socialist.

This was after graduating from the University of Oxford and completing  postgraduate research at Harvard University, all before he was 30.

But it is the ethos of the Open University — education for all — that has resonated most with Marsden.

“Giving people life chances is very important to me; it is at the centre of my political beliefs,” he says.

“Socialism is what Labour governments do, but for me it was always about practical things to improve people’s life chances.”

Marsden won Blackpool South for Labour in the late 1990s, a seat that he retains today.

“I knew Blackpool as a child and I thought that seaside and coastal towns had had a raw deal in terms of small businesses and tourism,” he says.

“But these things are important because of the cultural and historical resonance so I asked, ‘how do we get this town regenerated?’ How do we get skills?’ I also pushed the position of small businesses.

“In 1997, I became the first Labour MP in Blackpool. I thought whatever else happens to me, I’ve always got a little piece of history here.”

Marsden, who lives in Brighton with his partner of 28 years, Richard, grew up in a Labour household.

His father had been a trade union shop steward and, by the age of 10, the schoolboy from Romiley, just outside Stockport, had already stood for Labour in a mock election.

“I tracked down the local secretary who lived with his mother nearby and was literally signed up there and then in his front room.

“His mother gave me a hand-knitted Labour rosette, which I still have.  My involvement with the party from those days really coloured my view of what I thought politics was about.”

Marsden, born in Manchester, describes his railway engineer father and housewife mother as “ordinary working-class” people who “thoroughly supported him” through life.

He went to grammar school and was the first of his family to win a university place, giving his parents “very quiet pride”.

He describes his days studying history at Oxford as a “very important experience”.

“I met a huge range of people from different backgrounds and there were lots of opportunities to get involved with things — the debating society, historical society, literary groups and the Fabian Society,” he recalls.

“It focuses you sharply when you come from a background where no one had gone to university, let alone Oxford.

“I was there in the mid to late 1970s and I was very grateful, but there were a lot of people who I felt had come from much more privileged backgrounds who were playing at being revolutionaries. I used to call them mini Marxists.”

He got to know many well-known figures, including Peter Mandelson and Benazir Bhutto [Pakistan’s only female Prime Minister, who was assassinated in 2007].

“It was difficult at the time because the situation in Pakistan was so complex and we were all very concerned about what would happen in the future for her. It was a great loss, not just for her friends and family but also for her country.”

Marsden continued to pursue his love of history — handed to him, he says, by his grandfather — researching medieval religion for the Warburg Institute after university. But he crossed the Atlantic when the chance came up to take a year out to look into US politics.

He arrived on the eve of Jimmy Carter’s presidency, and was soon involved with an inquiry on human rights in Eastern Europe.

On his return, Margaret Thatcher was taking power for the Conservatives and academic jobs were, he says, “thin on the ground”.

Although the young academic landed the “dream job for a historian”, editing History Today, at his heart Marsden was still a political man, worrying about the bigger picture and the country in which he lived.

“The 1980s were a very difficult time for the Labour Party and a very frustrating time for me,” he says.

“I felt a lot of posturing and sloganising  was getting in the way of the big issues to improve people’s lives and the things that we should have been doing to fight Thatcherism and the Conservatives.

“I never thought of leaving the party because it was in my family, but it was only when Neil Kinnock became leader in the mid-1980s that I thought we were getting somewhere.”

He said Lord Kinnock inspired him so much that he wanted to “step up to the plate”. It was then that he started putting himself forward for a seat in Blackpool.

“When Neil Kinnock made his famous speech, ‘why am I the first Kinnock in a thousand generations to go to university?’ he said it wasn’t because his ancestors were not strong — it was because they had no platform on which to build,” says Marsden.

“That’s how I feel when I think of my grandfather and mother.”

Would local enterprise partnerships go some way to addressing this?

“The principle that skills policy should have a very strong local and sub-regional input is essential,” he says.

“We want the highest possible democratic participation in that process of decision-making. The students in FE, the apprentices, their families, local authorities have all got to have a say in that.”

But he adds that engagement between colleges and partnerships varies and his “top priority” is to create “strong, transparent structures and frameworks in education that will allow people to dip in and out.

“We should keep doors open and build bridges, not barriers,” he says.

How does he feel he was able to create his own platform?

“You just have to keep at it. You get disappointments and knockbacks, but you have to pull yourself up and not think that simply because you got on the ladder, that everyone else can get on the same one,” explains Marsden.

“I want to create exciting new frameworks in education that will make Britain prosper — at the same time giving people life chances.”

A Christmas Carol by Charles Dickens

Listen to music – everything from Hildegard of Bingen and Thomas Tallis, to John Adams and Sufjan Stevens

To visit – and learn from – the past