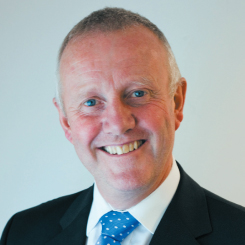 The smiling principal of Middlesbrough College seems like an unlikely sea captain. Just look at him in this week’s Campus Round-up where he’s showing off the soles of his feet painted blue and green.

But, last year, Mike Hopkins found himself in his element in a Force 8 gale when out sailing at night with two friends.

“We were sailing up from London to Hartlepool and suddenly got a gale warning,” he says.

“We were 30 miles out and I said ‘we’re staying out here now, guys — we’re going to ride this out’. My friends weren’t happy and asked why and I said ‘because we’re safer out here than we are near a coast, particularly a coast we don’t know and at night’.

“I knew it was right. But it was a big moment because at the back of my mind I was thinking that my life was one thing, but I also had other people’s lives in my hands.

“We had two or three minutes argument and then I said ‘stop now, that’s it. That’s what we’re doing.’

“I’ve always wondered about that moment because I didn’t have pips on my shoulder. I was just a guy with two mates. But looking back at it, I enjoyed it as well. I checked my books when I got back and I was right to stay out there, but it wasn’t an easy decision.”

“The mix of intellect and practical skills that sailing demands is something Hopkins seeks professionally, too.

“You’ve got to get it right if you’re out on the water,” he says.

The 55-year-old admits that this kind of pressure is also what appeals to him about the choppy waters of FE. It’s why he left his role as deputy chief executive of the Welsh funding agency in 2012 to return to leadership.

The sense of making a real difference to people’s lives was something I picked up on, even as a young man”

“Although I was a senior civil servant, I wasn’t the head of the show. I loved being principal and I like taking responsibility. Even when it goes badly I like being the one who steps up and takes things on . . . and when it goes well, I love sharing it,” explains Hopkins.

“I never stopped missing the cut-and-thrust of FE life.”

He took up sailing to help him to recover after his mother, Kathleen, died five years ago.

“I was privileged to look after my mum for six months before she died, and oddly it was the best six months’ relationship I’d had with her. It was a profound and moving life experience. When she did die I was impacted by it in a way that I just would not have predicted,” he says.

Hopkins may not be an Army officer, but he acknowledges that the armed forces has, in many ways, helped to shape him. His father, David, served in the Royal Navy during the war, and was in the army throughout Hopkins’ childhood.

An only child, he was born in Newton Abbot, Devon, but the family moved frequently.

“I didn’t have time to foster friendships, so I learned to go up to different groups of people and ask to be involved,” he says.

“While it might seem a little sad for a child, it’s equipped me really well for adult life because I’m comfortable with different people in different settings. It’s also given me a restlessness. Part of me wishes I could feel settled, but that restlessness is also a drive to constantly want to improve, to help others, to change things.”

But life changed dramatically when his father was severely injured in a car accident. He lost one leg; the other was badly injured.

“He should have died, really,”  says Hopkins. “It changed my life, though, and it certainly changed his — one day I had a fit and healthy dad who loved sport, the next day he was, in an old-fashioned way of putting it, crippled. That was a big thing for all of us — me, my mum, and my dad.

“It changed him. He became a bit fierce at times, frustrated, and physically it was never easy for him.”

His father left the Army and became the manager of a Goodyear tyre factory in Bolton — and the young Hopkins became a Bolton Wanderers fan.

He says his parents were “quietly proud” when he got into Cardiff University. “I came from a very ordinary background and when my mum and dad saw me wearing a suit I’m sure that they must have thought occasionally ‘he’s getting above himself’,” says Hopkins.

“While my dad never got the opportunity, he had a strong sense for education… he was quietly political, not active, but I remember as a little boy he’d ask me questions every Sunday like who’s the Foreign Secretary and who’s the Prime Minister?”

It was at Cardiff that Hopkins met future wife Amanda, and discovered his other life-long love, FE.

“I met mature students from the mines and the steelworks who’d come through the FE route. They were into politics and had trade union backgrounds. That stayed with me all my life,” explains Hopkins.

His experiences at university inspired him to take up his first job as a general and communications studies teacher, helping a wide range of students to add to their vocational skills. He says he enjoyed allowing them to come into contact with politics, both the content and the process.

“The sense of making a real difference to people’s lives was something I picked up on, even as a young man, and it’s something I believe in as a principal.”

This mission continued throughout his varied career in FE, as a teacher, as a principal, as a civil servant and into his current role.

“I’ve moved around and bobbed and weaved but I’m having the best time of my career now,” he says.

“The setting really drives me and there’s a real sense of moral purpose. The college has it too. Middlesbrough does have some areas of affluence, but there is too much poverty and the college has a major role to play in engaging with that and helping people move from that to living good, prosperous lives. That’s a real drive for me. I love it.”

A doctor, but I failed my 11-plus. My dad had a serious car accident when I was young and I spent a lot of time seeing him in hospital . . . I guess I wanted to help him by being a doctor

Buddha, Harold Wilson — he’s something of a childhood hero — and Nelson Mandela

To travel across time