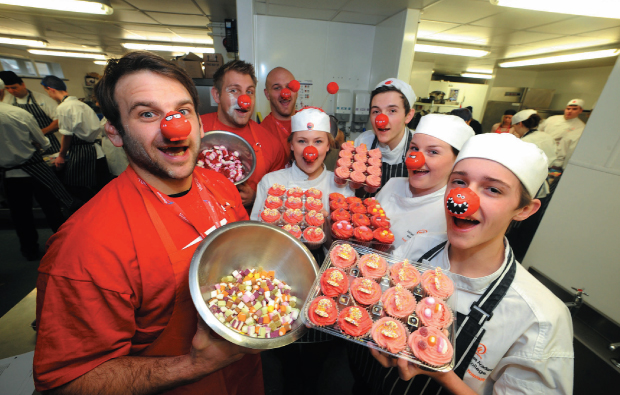 Chris Whitehead, Jack Yeandle and Carl Rimmer of the Exeter Chiefs joined catering students in Exeter College’s training kitchens to make cakes to sell to businesses across the city.

Student Fenella Gilson, 16, said: “It’s great fun having them here. They seem to be doing a good job so far but they’re a little messy!

“We were surprised some of the Chiefs had not baked cakes before, so hopefully they’ll have learned how by the time they leave.”

The Chiefs turned chefs to raise money for Comic Relief and Restart, which supports the families of injured rugby players.

Prop forward Carl said he’d enjoyed his day in the kitchen but found it  pressured.

“It’s excellent these guys can do such a fantastic job here every day. I’m not the tidiest of workers – but, as they say, the proof is in the tasting!”