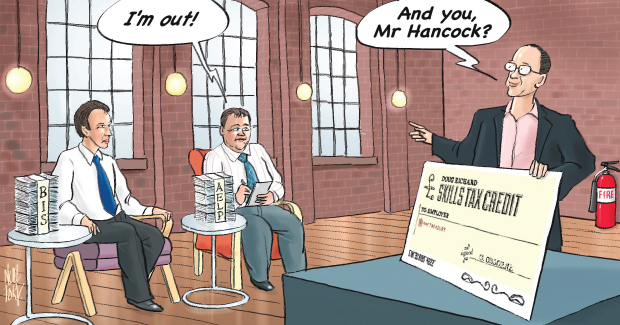 Entrepreneur Doug Richard has reignited his argument with the Association of Employment and Learning Providers that workforce tax breaks were “integral” to the success of apprenticeships.

The former Dragons’ Den investor spoke out in the lead-up to the sixth National Apprenticeship Week when FE Minister Matthew Hancock is due to respond to his government-commissioned report into apprenticeships.

The association rejected Mr Richard’s claims that tax breaks would encourage employers to take on apprentices, although he remained “convinced” that they were the way forward.

“We need to focus on securing workforce tax breaks,” he told FE Week.

“The Association of Employment and Learning Providers quickly rejected my recommendations; however, I am still convinced that tax credits are integral to the success of apprenticeships.”

He said apprenticeships were valuable initiatives that must be made as “attractive as possible to employers.”

“Offering workforce tax breaks is an excellent way to make that happen,” he said.

Some of the big things are wrong”

He said credits might have the “advantage of simplicity” but could cause cash flow problems – the “biggest threat” to otherwise effective and profitable SMEs.

He said to ask “invariably cash–strapped” SMEs to purchase apprenticeship training up front and wait for a retrospective tax deduction was “bizarre and unworkable”.

“We have no objection to making the option available but doubt whether it would be a successful vehicle to switch SMEs on to the apprenticeship route,” he said.

When Mr Richard’s report  was published in November last year, the association rejected his key recommendations for a closer relationship between employers and providers, with employers paying providers directly for apprenticeship training with tax credits, or other forms of government incentives,  dished out later.

It said the review “created a hugely damaging picture” from its front cover illustrated with various tools to its “lack of understanding”. It also said that “some of the big things are wrong” and that Mr Richard’s assertion that the report be accepted on an “all-or-nothing” basis was like a “diktat”.

Mr Hoyle said one of Mr Richard’s key recommendations — that “testing and validation process of apprenticeships should be independent and genuinely respected by industry” — particularly upset members.

Mr Richard, a Californian who made his money though technology transfer, bit back on Twitter, dismissing the group’s reaction as “self-interest”. He told FE Week at the time that his proposals were not “a laundry list” from which the government could pick the elements that it wanted.

His findings have since been considered by the government and Mr Hancock is due to make an announcement on the its response later this week.