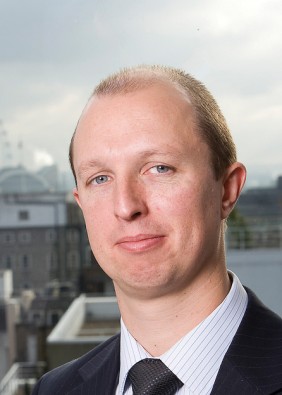 Richard Marsh remembers his first job well. “It was the Eighties, just after the Berlin Wall had come down, and loads of construction work was being done,” he says of working in post-Cold War Germany.

“I was part of a roving gang of builders, tarmacking roads and improving infrastructure, which felt a bit like an episode of Auf Wiedersehen, Pet.

“We had troubles with neo Nazi groups — they’d come to our campsites at night and protest, and throw things like bricks, trying to get us to leave.”

The 40-year-old says that he’d probably be intimidated now, but “wasn’t really worried” as an 18-year-old. “We used to go out to the local villages to dances,” he recalls.

Was it these early experiences that sparked an interest in different work ethics and methods?

“Looking back, there was a real difference in our working approach and that of the many other nationalities who were there, attracted by labour demands,” he says.

There’s no better job satisfaction than helping someone realise their potential.”

“The Brits were notorious for their labour speed and work ethic, but also for not having the right equipment and the right training.

“There were workers with us from Ukraine and Eastern European countries who were really scared about secret police and identity papers . . . but these were of no concern to us. It was an interesting time.”

Growing up in the Midlands, Marsh went to Hagley Roman Catholic High School before studying A-levels in English, history and sociology — which he “never finished” — at the now closed St Philips FE College.

He left without knowing what to do and ended up trying his hand at construction as a slinger and banksman — someone who guides cranes.

But after his third winter working outdoors across Europe, the Birmingham City fan says he’d “had enough” and packed it in to become the first “two-wheeled pizza delivery person in Birmingham”.

He soon tired “of all these jobs” and ended up at Edge Hill University in Liverpool when he was about 20 or 21 to do a degree in European business and politics. “I‘d enjoyed the travel and thought I could end up with a nice job working for the EU or something,” he explains.

That was the plan, and while it might not have worked out exactly as he envisaged, Marsh did meet his Spanish wife Victoria who’d come to study in Liverpool. The couple, who now live in Edgbaston, Birmingham, have two children, Isabel, 10 and Elena, 6.

Marsh’s next foray into the world of work led to a stint at travel company, Seligo, joining as a sales representative before finding his niche in training. At 25 he was on to another venture; this time training for Vodafone, a job that fostered his love of apprenticeships.

“At the time they were expanding massively,” he recalls. “It was a great British story as they went from having one million customers to having 100 million around the world — and I was part of the  team training up the call centre.”

He taught Vodafone’s first modern apprenticeships, implementing its customer service programme and soon realising the potential of giving people who’d missed schooling in English and maths the chance to get qualifications, gifting them structure for the start of a career.

He stayed at Vodafone until 1999 when he took a post at Volkswagen UK as head of content for training qualifications.

“At the time we had lower unemployment than Germany, and the Germans were asking ‘why can’t we have a flexible workforce like in the UK?’,” says Marsh.

We quickly realised no country had a monopoly on good ideas and you had to find a balance.”

“Germany was the sick man of Europe economically and all the German employers would say to me ‘in this country you have to train for three years to work as a waiter,’ whereas in the UK we used to talk about how thin our training programmes were.

“We reported back to Berlin every month on what our country was doing, so together we could set a European-wide standard on training programmes. We quickly realised no country had a monopoly on good ideas and you had to find a balance.”

This was Marsh’s last job in the private sector as he then moved into the public domain working for the Learning Skills Council (LSC) [now the Skills Funding Agency].

“I felt I had something to offer to a public sector organisation from my commercial training . . . I think it was something that came from my parents. They were both public servants in a very literal sense,” he says.

While Marsh went off to school his mum trained as a nurse while his father worked as a probation officer.  “He had a real gift for helping young people reintegrate into society and was very successful,” he says.

“There’s probably no better job satisfaction than helping someone realise their potential. They had very satisfying careers and were very much an influence on us growing up.”

Marsh’s older sister also became a nurse while his younger brother went on to work in drug and alcohol counselling.

Ever drawn towards a challenge, however, the fan of vintage motor scooters then moved to take his current role at NAS. He has since given presentations on apprenticeships in countries such as China, which has invested in vocational training.

“They’ve opened 1,000 vocational schools with state-of-the-art equipment, but still employers are saying the young people are not ‘work ready’ because they don’t have work experience,” explains Marsh.

There’s a lot of pressure on Chinese youngsters to go to university as most families have just one child.

“We’re trying to get across the message that you can’t ‘over-train’.”

Marsh wears his heart on his sleeve when it comes to apprenticeships, whether he’s talking in China, writing a chapter on the subject in books such as Apprenticeships in the Modern Economy, or back on home turf.

Explaining his motivation he recalls a recent graduation ceremony for IBM apprentices.

“Their parents were so proud they were in tears,” says Marsh.

“These were some of the brightest, hard-working young people in the country who would have had the opportunity to go to a really good university or start a business, but instead chose to work incredibly hard and study at the same time, getting a massive reward for it.

“In England we’re probably half-way towards a world-class apprenticeship programme because we’ve rediscovered our love of apprenticeships and built up our capacity again.

“We’ve got to allow time to refine and develop the programme until it reaches the standards that our best universities and schools have through 100 years of continuation and refinement.

“Apprenticeships aren’t for everybody but they do work for lots of young people. Where they do, the results are tremendous.”