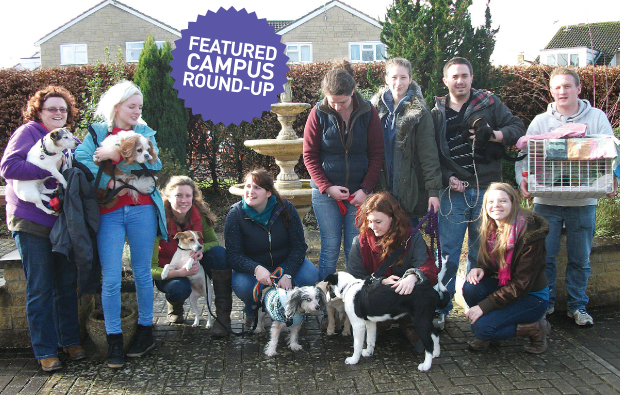 Caring Wiltshire students took time out from their studies to take a collection of pets to a local old people’s home.

Fourteen youngsters delighted residents — the oldest 103 — at Kingston House Residential Home, in Calne, with a variety of animals including those from an animal centre and their own pets.

The visit also gave the learners the opportunity to see for themselves the effects of animal-assisted therapy (AAT) as part of their BSc honours degree in animal science and management.

Josh Chitson, 21 and from Priston, near Bath, took a leopard gecko to Kingston House.

He said: “The residents definitely became more animated once the animals came out, some were truly in their element, being able to have contact with them.

“This in turn got them talking about pets they had in the past and experiences they have had with some of the more unusual animals.”

Animal therapy is often used in hospices, hospitals and care homes and makes use of the scientifically proven benefits of interaction with animals, such as lowered blood pressure, reduced anxiety and the release of feel-good hormone oxytocin, to promote physical, mental and social wellbeing. One resident, who had just celebrated his 99th birthday, became so relaxed he fell asleep while stroking a guinea pig said the animal’s owner, Jes Hooper.

Jes, 23 and from Corsham, said: “I thought they would prefer some of the other animals including the dogs, but those I spoke to asked lots of questions and were very keen to hold the guinea pig.

“I have been aware of AAT since I was young as a relative of mine used to work with animals but it was very interesting to see during our visit.”

A corn snake by the name of Athena, brought by Louise Hillier, 22, also proved popular.

Louise, from Chippenham, who borrowed Athena from fellow student Kyle Barker, said: “I really expected them to be scared but none of them was at all. They all wanted to hold the snake, see what it felt like and asked lots of questions about what other snakes there were. They really wanted to learn more.

“The benefits of AAT were obvious, particularly one gentleman who really liked oil painting — he asked us to take some photographs so that he could do some painting.”

She added: “Another man was bedbound and unable to come downstairs so we went to him and he was really pleased to have visitors. It was a great experience for us.”

She said: “One of the ladies I spoke to had dementia but once she saw Finn she really opened up and started talking to me.

“It was really lovely for me to see how she responded to Finn and it brought back fond memories of her old dog.”

The visit was so successful that other care homes in the area have asked for the students and the animals to visit so their residents can experience the benefits of AAT.